National team’s Ji sets sights on Round of 16

National team’s Ji sets sights on Round of 16 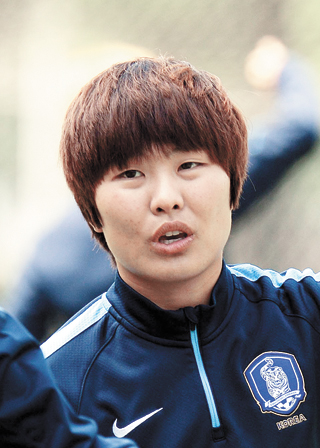 Forward Ji So-yun says she hopes to help the national team win its first match and advance to the Round of 16 at the upcoming FIFA Women’s World Cup.

Ji spoke Wednesday at the National Football Center in Paju, Gyeonggi, after returning from England, where she plays for Chelsea Ladies FC in the FA Women’s Super League.

She arrived in the country Tuesday after tying Manchester City Women 1-1 on Sunday, local time. The 24-year-old didn’t join the national team’s training program on Wednesday in order to recover from her jet lag, but participated in simple weight training and running drills.

The FIFA Women’s World Cup, which starts on June 6 in Canada, will be Ji’s first. Korea is ranked No. 18 in the world and is grouped alongside Brazil, Spain and Costa Rica.

“We are going to the World Cup for the first time in 12 years, but we lost last time,” she said. “For this event, our goal is to get the first win and reach the Round of 16.”

Ji, currently the top scorer for Korea with 38 goals in 74 matches, said that she will do her best to win against No. 7 Brazil, which Korea plays first in the tournament.

“It may be fortunate to meet Brazil in the group stage,” she said. “If we play as prepared, there shouldn’t be any issues.”

“My teammates and I know what to do in the World Cup - our experiences in the U-20 World Cup in 2010 will help us a lot,” she said. “I’m used to joining the team about two or three days before the match, but since we have about a month to prepare, I will use this time to get in the best shape possible.”

Ji, who was named Professional Footballers’ Association Women’s Player of the Year last month in London, said that her experiences in England will also help her in the tournament.

“The award gave me confidence that I can also do well in the World Cup,” she said, adding that her fitness had improved overseas.

The 161-centimeter (5-foot-3) player clarified that she’s not the only player on the team who poses a threat to opponents.

“Some think that if I get blocked the whole team struggles, but that’s because people haven’t seen our matches clearly,” she said. “All our players are talented, so even if an opponent defends me well, my teammates will have plenty of opportunities to score.

Ji also mentioned that before leaving England, she received advice and support from Ki Sung-yueng, the men’s national team midfielder who plays with Swansea City in the English Premier League.

“Sung-yueng brought me beef one day and Chinese the next, telling me that I need to eat well before going to the World Cup,” she said.

The women’s team will have a practice match against Nunggok High School on Saturday before departing for the United States next Wednesday to have a friendly against the U.S. team on May 31. The team arrives in Canada on June 4.