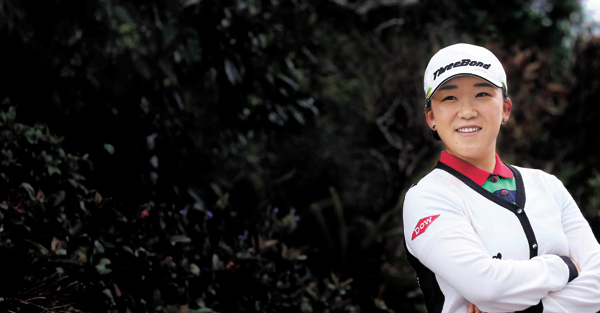 Shin Jiyai, the first Korean golfer to become No. 1 in the world, is finally set to be inducted into the KLPGA Hall of Fame.

The 27-year-old will be initiated this November, becoming the third person to receive the honor after Pak Se-ri and the late Ku Ok-hee.

Shin already qualified in 2010 after collecting her 20th victory in the local women’s tour, but the organization requires players to have played on the KLPGA Tour for at least 10 years before they can be inducted.

Shin’s first appearance was in September 2005, when she won the SK Enclean Invitational as an amateur. She turned pro two months later.

She was the KLPGA grand prize recipient from 2006 to 2008, and holds the record for the most wins in a single season - nine trophies in 2007.

Her dominance continued into the LPGA in late 2000s, winning the LPGA Rookie of the Year and becoming the top prize earner in 2009. Shin has totalled 11 LPGA Tour victories.

But she raised eyebrows last year by forfeiting her LPGA Tour seed to focus on the JLPGA. She said her goal was to become the first golfer in the world to claim the top prize money in Korea, the United States and Japan, but critics accused her of fleeing the LPGA after a string of poor performances. Some said that the 156-centimeter (5-foot-1) golfer lacked the power in her shots necessary to compete in the top tour.

“I felt uncomfortable last year because many people said my goal of being the top prize money earner in Japan was insincere,” she said. “No one saw my goal for what it was.”

She says her decision to pursue a new challenge was due to the lack of motivation she felt after becoming No.1 in the world in 2010.

“In one moment, I thought of myself as a ‘golf machine’ that just plays tournament after tournament,” she said.

“After becoming No.1 in the world, some fans stopped seeing my accomplishments and only focused on my mistakes.”

The two-time Women’s British Open champion also said loneliness was her enemy after series of injuries. After suffering from a finger injury and back pain in recent years, she began missing tournaments.

“I had already earned a lot of money and experienced many good things, but my injuries led me to feel quite lonely,” she said.

Feeling isolated, Shin decided to focus her attention on competing in Japan.

Shin has been reinventing herself in recent years, throwing away her glasses and having double-eyelid surgery in 2013. But the biggest change the South Jeolla native made was throwing out her trademark long pants, instead playing in shorts.

“I did wear shorts in the past during the international competitions, but this is the first time I’ve been wearing shorts on tour,” she said.

With her new style, Shin won the Cyber Agent Ladies on May 3, which was her first victory in the JLPGA Tour this season. It was also her 10th career win on the JLPGA Tour.

Shin said she is committed to pursuing her goal. She will participate in the Hoken No Madoguchi Ladies that starts on Friday in Fukuoka.

“I will first put my best effort forward to become the top prize money earner in the JLPGA Tour,” she said. “My first victory in the tour came earlier than last year, so I hope it serves as a spring board for my goal.”