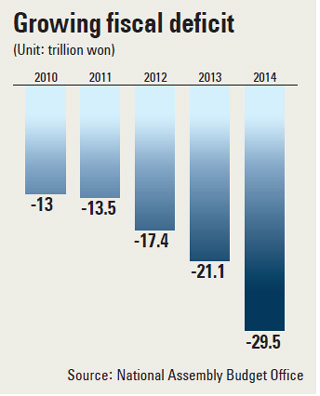 The Korean government announced a set of economic reforms for the next five years to enhance its fiscal soundness, tighten inspections on budget management and expand spending on welfare and job creation.

The government said it will legislate the so-called Pay-go principle, in which lawmakers and bureaucrats have to come up with alternative revenue sources to fund legislation that requires spending.

Korea has talked about the principle since 2010, but it has no legal bite. Lawmakers have voted in a welfare program that proved unaffordable.

Economy-related ministries, including the Ministry of Strategy and Finance, Ministry of Science, ICT and Future Planning, Ministry of Trade, Industry and Energy, and the Financial Services Commission, announced the policy reforms at a National Financial Strategy Meeting hosted by the Blue House Wednesday.

“The Korean economy is on the verge of either leaping ahead or remaining stagnant as the global and local economic slowdowns are barely showing signs of recovery,” President Park Geun-hye said in an opening speech Wednesday.

“For Korea, which faces skyrocketing welfare spending for its rapidly aging society, the Pay-go principle is urgently needed in order to maintain our fiscal soundness,” Park said.

According to the Finance Ministry, the United States saved $55 billion over the past five years after legislating the Pay-go principle in 2010.

In the American model, each policy that requires a budget is subject to fiscal screenings by the legislature. Even after passing into law, the programs face audits every year if there are losses or surpluses.

Under the plan discussed Wednesday, belts will be tightened in many areas.

The government will reduce R&D subsidies for conglomerates and use them to support small and midsize tech companies.

Korea has seen R&D investment grow by an average of 12 percent every year for the past decade. It ranked No. 1 in the world for state R&D spending as compared to gross domestic product in 2013.

The government hopes to boost the efficiency of its R&D spending. Analysts have said state R&D funding has been managed poorly.

The plan designated five state-run research institutes in IT, electricity, chemistry, machinery and materials to investigate the needs of SMEs, benchmarking Germany’s Fraunhofer Institutes, which perform a similar role.

The government hopes to crack down on fraudulent subsidies claimed by social welfare, religious, cultural and sports organizations.

Some welfare subsidies for day care services, nursing homes, medical care and services for people with disabilities have been given universally. They will be rewritten to crack down on fraud.

With the money saved by such measures, the government hopes to expand spending on public safety infrastructure, welfare programs and job creation initiatives, while encouraging the private sector and state-run enterprises to spend on infrastructure maintenance and construction projects.

Meanwhile, the government will take a more aggressive stance on taxation, particularly regarding tax evaders.

“A tax hike is the last resort for us,” said Bang Moon-kyu, vice minister of strategy and finance, at a press briefing on Tuesday. “Our first priority is to reform the fiscal system and collect the tax we missed.

“Tax revenues increased slightly in the first quarter of this year, but we have to wait until the latter half to see if the revenues are enhanced compared to last year,” Bang added. “Considering the fact that the revenue is predicted to expand, the Finance Ministry will announce revised tax management plans in September.”