Ahead of the Asian Infrastructure Investment Bank’s (AIIB) announcement of its governance structure, competition is heating up among the 57 member countries, including Korea, to be a part of the inner circle of the China-led institution.

Korea is likely to be one of the top 10 countries in terms of share ratios, said a government official, but it will not be easy for Seoul to hold more than the 5 percent of shares necessary to be in the top five.

“Five percent of shares is too ambitious for us,” said the official, who is familiar with ongoing negotiations over stakes. “But we are pretty sure we will be among the top 10 countries.”

AIIB members are close to a consensus on what calculation method should be used to determine shares for each country, the official added.

“Negotiations over the ratio of shares for each country are almost complete,” he said. “They already have determined a formula to gauge the economic scale of each member.”

When it comes to choosing a vice president, nothing has been decided yet, the official said.

“We have not even decided yet on organization,” he said. “But the competition is really tough among member countries to be a vice president of the bank.”

His comment came after Russia was selected as a regional member of the bank at the first meeting of founding members on April 27 and April 28, according to the Beijing’s state-run Xinhua News Agency.

A source told Xinhua that some of Russia’s regions adjacent to Asia would benefit AIIB investment.

Russia joining the bank as a regional member cast a shadow on Korea’s position, prompting concern that Seoul could be edged out by Moscow as a core member of the institution.

“If Russia becomes third, we would be the fourth,” said Choi. “China and India are the biggest, so now the question is who will rank third to fifth.”

Dismissing worries that Korea’s decision to join the bank as a founding member just five days before the deadline could have a negative impact on the country’s prospects of being a major stakeholder, Choi said, “regardless of the order of joining, the shares are decided by a certain rule.”

According to a report by the state-run Korea Institute for International Economic Policy, under a scenario where regional members have 70 percent of voting shares and nonregional members 30 percent, and Russia joining as a regional member, Korea would hold a share of between 2.77 and 4.09 percent, ranking between seventh and 10th.

With Russia becoming a regional member, it could compete with India for the number two position, while Germany would be placed fourth. Korea would lag far behind France, Brazil, Indonesia and even Australia, according to the report.

In any case, Korea would hold no more than 4.5 percent of shares in the bank, the report said. 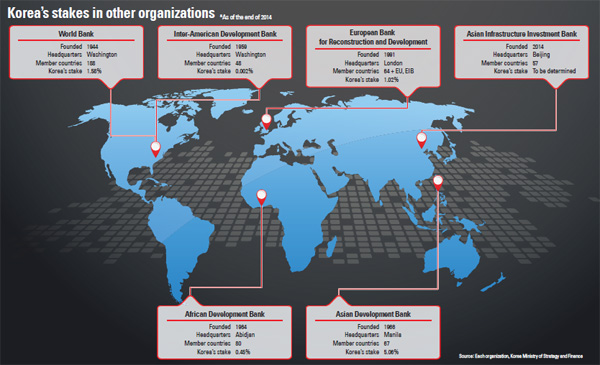 The report’s scenario, submitted to the National Assembly in April, was far below expectations when Seoul announced it would join as a founding member.

After the announcement on March 26, an unidentified senior Korean official told reporters that the government was expecting at least 5 percent of shares in the bank.

Another potential hurdle for Korea would be a decision by Japan to join the bank. Although Tokyo postponed joining as a founding member, it has time until the AIIB governance structure is released at the end of June to make a final decision.

“Some sources say Japan will join the bank before the end of June, although it would not be a founding member,” said Lim Ho-yeol, an executive director of the Korea Institute for International Economic Policy. “If Tokyo donates a lot of money to the bank when it joins, its share ranking could conceivably rise.”

On May 5 in Beijing, ruling Liberal Democratic Party Vice President Masahiko Komura said after meeting with Zhang Dejiang, chairman of the National People’s Congress’ Standing Committee, that Japan may join the AIIB, the Asahi Shimbun reported.

Komura said there was “a possibility” Japan will consider joining the bank “once concerns over its operational transparency and other standards are alleviated,” the newspaper reported.

Besides the share quotas, competition to be an AIIB vice president is picking up.

At the Asian Development Bank (ADB) led by Japan, Korea was tapped as one of the four vice presidents from 1988 to 2003. However, since 2003 Seoul has not been named to the post, even though the number of vice presidents was increased to five in 2010 and six in 2013. Current ADB vice presidents are the United States, Australia, China, India, France and Nepal.

“It won’t be an easy decision for Tokyo, particularly in the face of opposition from longtime ally the United States,” said Lim.