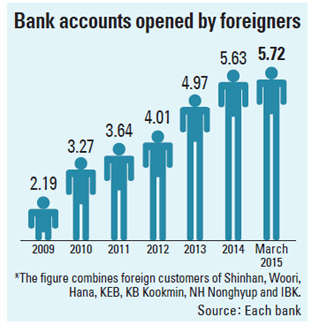 On May 10, a Woori Bank branch in Wongok-dong in Ansan, Gyeonggi, opened at 10 a.m. and customers streamed in. Eventually a line of customers waiting to get in spilled over into the street.

“We operate on Sundays and holidays for foreign workers [in Ansan] who barely have time on weekdays to attend to their banking needs,” said Kim Jang-won, head of the Ansan branch.

In other parts of the country, bank branches are either closing down or merging as Korean customers turn to online or mobile banking.

Ansan, just south of Seoul, is different because of all the foreigners working in factories. And Woori isn’t the only Korean commercial bank catering to foreign workers in Ansan. So are Shinhan, Hana and KB Kookmin.

In fact accounts held by foreign customers at Korean banks - including the four banking groups (Shinhan, Woori, Hana and KB Kookmin) as well as banks such as NH Nonghyup and IBK - now total 5.72 million.

Although Korean customers far outnumber foreigners, the banks see the foreign customers as more than a niche market.

That’s because the rate of growth of the market has been brisk. By the end of 2013, the number of foreigners using local banks amounted to 4.97 million. In just one year, 660,000 new customers started banking. The number of foreigners living in Korea has been growing since the mid 2000s as people move here for jobs, marriages or to study. As of 2014, 1.57 million foreigners lived in Korea, a 52 percent increase from 2004.

For banks, this is a lucrative market.

“We started to put some focus in assessing the number of foreign customers and ramped up our management five years ago and at one point it became a lucrative market that we couldn’t miss out on,” said a high-level marketing executive of a local commercial bank.

There are three types of foreign customers. The first are often referred to as foreign workers, mostly blue collar workers from Southeast Asia. They are the largest group. According to Statistics Korea, foreigners working at Korean companies amounted to 852,000 last year. Nearly half, or 410,800, work in manufacturing.

Most of these customers use banks to send remittances home. Although their salaries are modest, once they become loyal customers the banks are able to profit by selling financial products such as deposit accounts or debit or credit cards.

Banks compete for their business by offering lowered commissions on foreign exchange transactions and remittances.

NH Nonghyup Bank has an agreement with a bank in the Philippines and only collects 10,000 won ($9.10) on transfers of up to $2,000. Additionally it offers a discount of 45.3 percent on the commission for automated money transfers of more than $1,000.

State-run IBK offers a service in which it transfers the monthly paycheck of the foreign worker to his or her home country, which takes the onus off the employer, who otherwise would be responsible for the task.

The second group of foreign customers are the so-called expatriates, foreigners with executive positions at companies or professionals like lawyers, doctors or teachers.

Woori Bank runs a special desk for foreign customers with professional jobs at six of its branches including Hannam-dong in Seoul, as well as branches near leading Korean conglomerates like Samsung.

Some offer exclusive cultural events for expat customers. Last month, customers of Korea Exchange Bank (KEB) spent two days at a temple at Mount Sokri in North Chungcheong. The VIP customers participated in the 108 prostrations, attended a tea ceremony and meditated in the woods.

The third group of foreigners being targeted by banks are Chinese. The banks realize that the number of Chinese tourists to Korea is mushrooming and they are introducing various products tailored to their needs. Last June, Woori Bank opened an exclusive desk for Chinese visitors at its branch in Jeju, a hot destination for Chinese tourists.

The desk is actually a separate room with a separate entrance due to Chinese customers’ preference for anonymity.