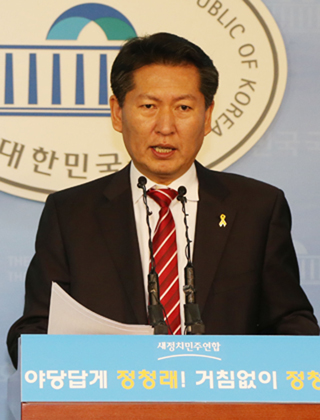 A senior member of the main opposition party on Wednesday faced a punitive suspension from attending leadership meetings for making disgraceful, provocative remarks toward a fellow lawmaker.

Moon Jae-in, the chairman of the New Politics Alliance for Democracy (NPAD), said Wednesday that Representative Jung Cheong-rae, a member of the Supreme Council, will be barred from attending the council meeting.

“In addition to the suspension, the party’s ethics tribunal will also review the petition seeking disciplinary action against Rep. Jung based on the party’s constitution and regulations.”

Before making the decision public, Moon also told the reporters that he had reflected upon the party’s disciplinary measures and order over the past few days. 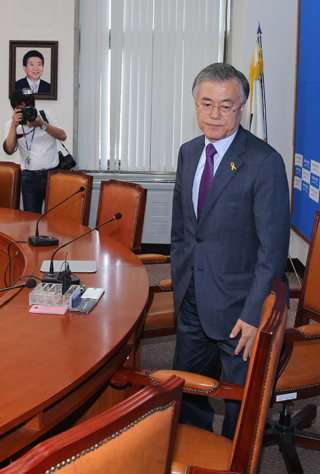 Moon Jae-in, the chairman of the main opposition New Politics Alliance for Democracy (NPAD), prepares to leave his office in the National Assembly after announcing at a press conference on Wednesday that Rep. Jung Cheong-rae, a member of the Supreme Council, would be barred from attending the council meeting. By Kim Sang-seon

“Jung will have some time for self-restraint for a while,” he said. “I hope [this decision] will serve as an opportunity to bring about unity and reform for the party.”

The NPAD’s bigger problem centers on a person who “blackmails the party” by putting his position at stake, Jung said, targeting his criticism toward Joo.

A harsh critic of Moon and his way of running the party, Joo had repeatedly signaled that he would step down from his position unless Moon eliminated lawmakers loyal to the late Roh Moo-hyun from his inner circle.

Apparently upset by Jung’s comment, Joo expressed in the middle of a supreme council meeting his deep humiliation as well as his intention to resign from his leadership position.

A former student activist and two-time lawmaker, Jung is famous for his pointed straightforward criticism. During the 2012 election, he served as the online communication chief for Moon’s presidential campaign.

While Moon and other senior party leaders have attempted to mend internal splits, one group of lawmakers demanded that Jung be expelled from the NPAD for his actions.

The NPAD assembled its lawmakers on Tuesday for a meeting, during which Rep. Kim Dong-cheol, a three-term lawmaker, demanded that Moon expel Jung.

“We must take action to demonstrate the party’s intention to change,” he said.

Kim later told the JoongAng Ilbo, “I don’t think Moon needs to step down [to take the responsibility for the by-election defeats], but the party is in a serious crisis. Moon must change the party with a determined mind, and the first step should be Jung’s expulsion.”

“Jung has posed himself as the ‘cannon of the party’ and issued a number of senseless remarks,” another lawmaker representing a constituency in the capital region told the JoongAng Ilbo. “By doing so, he has disgraced the party. This time, he managed to fire his cannon directly within the party.”

The source added that doing nothing about the current situation would eventually hinder NPAD campaigns in next year’s legislative elections.

Jung has often stirred up controversy with his crude remarks and many times promoted the idea that President Park Geun-hye be impeached.

Additionally, when Moon visited the graves of former Presidents Rhee Syngman and Park Chung Hee after his election as the opposition’s chairman, Jung compared the situation to a Jewish man paying his respects at the grave of Adolf Hitler.

On Tuesday, a group of 50 NPAD members also requested that the party’s ethics tribunal punish Jung.

After Moon announced his decision to ground Jung for his provocative behavior, Jung told reporters Wednesday that he regretted causing concern among party members and the public. “I will refrain from making public remarks as much as possible and remain silent,” he said. “Because there is a room for a misunderstanding, I won’t make political remarks.”

Jung added that he agreed with Moon to stay tight-lipped, but insisted he was still a Supreme Council member.

One of Joo’s allies, who Jung also criticized, said Joo would wait and see if that promise was just a political show or a sincere pledge.