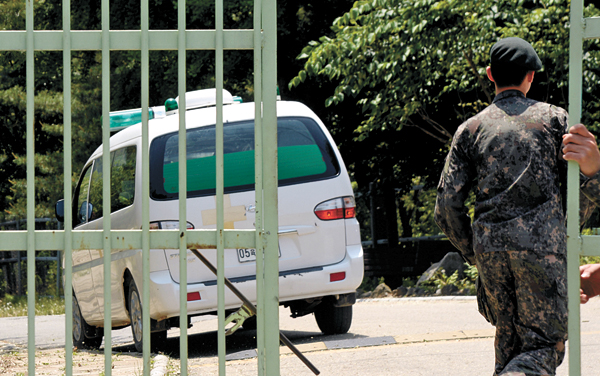 An ambulance is seen at the reserve forces training field in Naegok-dong, southeastern Seoul, where a shooting spree took place on Wednesday. [NEWSIS]

A shooting spree during a Korean Army reserve forces training session in Seoul Wednesday morning killed two people and injured three others. One of the fatalities was the shooter, who killed himself.

During a shooting session Wednesday at a reserve forces training center in Seocho District, southeastern Seoul, a trainee named Choi was given a K-2 rifle with a magazine containing 10 bullets. After firing one round, Choi randomly fired seven times at fellow trainees standing in other firing lanes or waiting to shoot. Then he fatally shot himself, the Army explained.

A trainee surnamed Park was shot in the head and pronounced dead on arrival at a hospital.

The trainees were doing a three-day training session from Tuesday to Thursday.

The Ministry of National Defense subsequently held a press conference and apologized for the incident.

“We convey our sincerest condolences to those who died in the reserve forces training session,” said Kim Min-seok, the ministry’s spokesman. “We will carry out a thorough investigation into the case and take measures to prevent similar cases.”

Defense Minister Han Min-koo left the National Financial Strategy Meeting presided over by President Park Geun-hye and came back to the ministry to deal with the rampage.

The Army added that the chief of staff, Kim Yo-hwan, who was on a visit to China and the Philippines, decided to return after learning of the incident. The training center canceled its schedules for the day for the investigation.

Investigators from the central investigative unit of the Army and the National Forensic Service visited the base, and helicopters carrying general-level officers kept coming in and out of the base. Some parents of the trainees who couldn’t determine if their sons were safe went to the base Wednesday. The trainees were ordered to call their family and let them know they were okay.

K-pop singer Psy took part in the training session but later explained he left the base 20 minutes before the shooting spree because he had appointments in the afternoon. The Army and Psy’s entertainment agency explained that he will take part in another session to make up for the session he missed.

Criticism arose quickly that the training center did not have proper security measures.

“There was no such thing as security devices such as chains securing the rifles,” said a 28-year-old surnamed Kang, who took part in a three-day reserve forces training last year. “If a trainee wants to shoot others, they could do so even with instructors behind them.”

It was later disclosed that shooter Choi was once classified as a soldier who needed B-grade special attention, which means that he was considered mentally unstable. The scale is from A to C. Choi did his compulsory military duty from 2012 to 2014. Korean men are obliged to do reserve duty for seven years after finishing their time in the Army. They are trained once a year.

Men who did their military duty with Choi said he did not adapt well.

“Choi was often scolded by superiors because his performance wasn’t good enough while he was working at the guard observation post,” said one of his fellow soldiers. “He could not stand it well and complained about the situation from time to time.”

“As he was often blamed by superiors, he was moved to another company and got a new job,” another person who served military duty with him said. “He often asked me to buy him drinks after finishing the military service, but we never met since. Whenever I asked if he had problems, he always said no.”

Neighbors described Choi as introverted and quiet. A neighbor said, “He looked nice, but never said hello and did not make eye contact.”