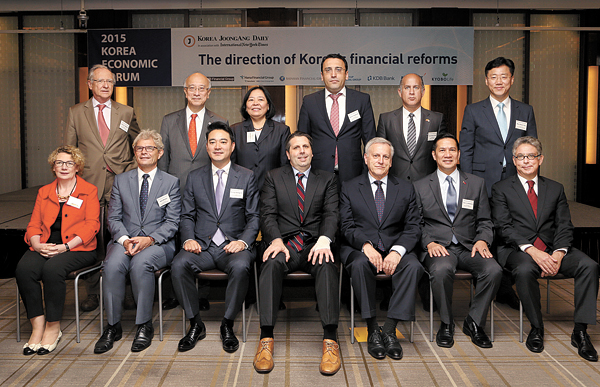 Speaking before roughly 120 ambassadors and leaders of foreign financial institutions and businesses at the annual Korea Economic Forum in the Westin Chosun Hotel in central Seoul Thursday, Financial Services Commission Chairman Yim Jong-yong put extra emphasis on his determination to overhaul the local financial industry to raise its international competitiveness.

The country’s finance sector has been criticized for stalled growth in recent years compared to prospering industries like IT. 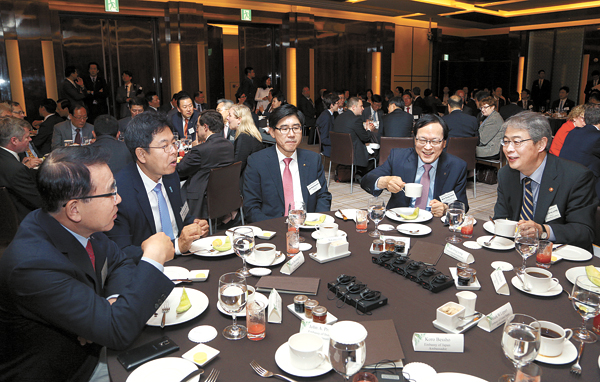 Although the Korean financial industry has grown and matured since the 1997 Asian financial crisis, it is still considered limited due to old regulations and lack of innovation.

Since 1980, the total financial assets of Korea grew 120 times, surpassing GDP growth, according to data from the financial regulator. 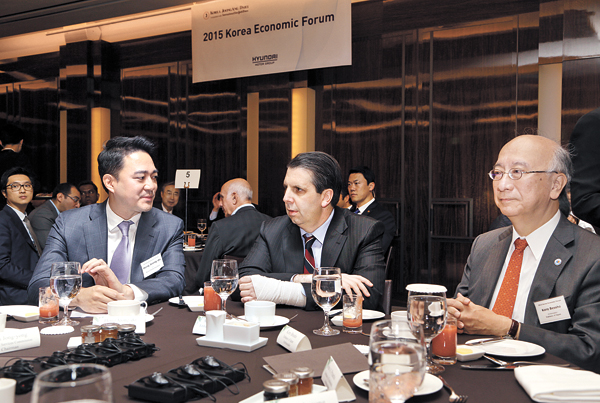 Notwithstanding, reviews of the Korean financial industry are not sterling. It remains old-fashioned and its international competitiveness is particularly low, Yim admitted.

The chairman cited the 2014 IMD World Competitiveness report that ranked Korea’s financial competitiveness in 29th place among 60 nations. Capital market maturity is low, too, with small and medium-size enterprises mostly relying on loans for finance rather than the capital markets, Yim said.

“Korea’s financial industry has failed to find a new growth engine while losing dynamism and innovation,” Yim said. “It is currently facing many challenges such as low interest rates, an aging society and increasing need for convergence between IT and finance.

“It is the right time as well as the last opportunity for the financial industry to make reforms,” Yim added.

At the forum, the chairman introduced a “3+1” framework for his two-year reform plan. The 3+1 system will consist of three bodies that will discuss and execute policy measures and a working-level team that will listen to complaints and opinions of financial institutions and their employees in the field. Financial reforms should be based on the opinions of financial institutions in the trenches, he said.

Starting on April 2, a working-level team visited 62 financial companies in three weeks, and 1,084 opinions or ideas have been submitted. “Among 614 opinions submitted in the first three weeks of April, we completed sending responses to 447 in two weeks, and accepted 219 requests, 49 percent of all,” Yim said.

The role of the financial regulator will be redefined to give more autonomy to financial companies, Yim explained.

“The financial regulator will act as a referee who ensures that all rules and regulations of the game are correctly followed, not a coach who directs details of the play,” he said. “The whole process of supervision, inspection and sanctions will be overhauled to reduce excessive regulatory burdens on financial companies.”

Financial companies will be guaranteed the principle of autonomy in making decisions about service fees, interest rates and dividend payouts, according to the FSC.

“The FSC will foster a culture of responsibility in which financial companies voluntarily undertake their responsibility in expanding capacity, strengthening internal control and protecting consumers,” he said. “Also, we will eliminate the old practice of requiring written statements from employees of financial institutions.”

The regulators will also switch from punishing individual employees and instead hit institutions with monetary sanctions, Yim said.

For example, 60 employees and executives at financial institutions were punished for the leak of more than 100 million pieces of personal information about customers in 2014, while the fine on the relevant financial institutions was only 6 million won ($5,400). In a similar case in the United Kingdom, financial authorities fined companies more than 5 billion won for leaking data on 1.8 million customers in 2008, he said.

“To increase support for the real economy, the FSC will channel more funds to businesses with innovative technology and creative ideas,” Yim said.

He also described a “Technology Finance” initiative that will encourage financial institutions to lend to promising start-ups.

The financial technology initiative is aimed at moving away from the old lending practice that depended on borrowers pledging collateral. “To be honest, there have been negative comments,” he said. “We will improve the initiative by strengthening banks’ capacities and granting more financial support for new enterprises based on our ongoing survey.”

Capital markets will also be encouraged to provide venture capital to innovative start-ups, according to the FSC plan.

“I think the capital market should be the center of the Korean financial industry,” Yim said. “We will build up a structural system to supply venture capital for enterprises at the right time, and to collect the capital after their growth in an opportune stage.

“To boost investments by venture capital firms, the government will provide incentives in terms of regulations and taxation,” he said.

The current bourse system will be restructured so that the Kospi, Kosdaq and Konex can better serve their markets and compete with each other.

Yim also said that his efforts will differ from past failed attempts at a real overhaul.

“This time we will make reforms that are not controversial, but practically helpful, feasible and specific,” he said. “The reform efforts will be continuously monitored.”