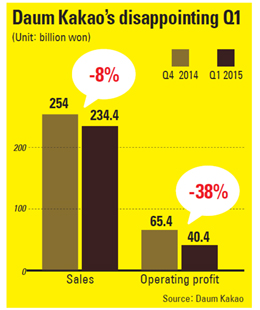 Daum Kakao, the operator of the nation’s top mobile messenger and the second-largest search engine, reported disappointing first-quarter earnings due to increasing internal expenses and weaker-than-expected advertising and gaming sales.

Since the merging of search engine Daum and mobile app KakaoTalk took place in October, the year-on-year comparison is likely a less accurate source of performance analysis.

Daum Kakao’s net income fell by 40 percent to 30.8 billion won when compared to the previous quarter.

The company’s revenue this quarter came to 234.4 billion won, decreasing 8 percent quarter-on-quarter. But the results represent a 19 percent increase year-on-year.

The major culprit for the downbeat performance is increased spending on building and promoting the firm’s new offerings such as KakaoTaxi, an Uber-like ride-hailing service, and mobile payment service KakaoPay.

The company reported 194 billion won in operating expenses, a 32 percent jump compared with the same period last year and a 3 percent increase from last quarter.

Daum Kakao warned of heavy investments in 2015 as it steps up efforts to expand its offerings.

“Over the course of 2015, we will focus on investments in a push to build sound foundations for further growth rather than short-term gains,” said Choi Se-hoon, co-CEO of Daum Kakao, in a conference call after the announcement.

He also indicated investment will be focused on further developing different platforms run through its KakaoTalk app.

“The mobile market is the most rapidly growing segment of business,” Choi continued. “We will cement our status as the No. 1 mobile platform by reinforcing our strengths in the market.”

By sector, sales in advertising - the company’s largest revenue source - decreased by 14 percent to 141.8 billion won compared with the previous quarter.

The company saw moderate growth in gaming, once a major growth engine. Revenues of the mobile game sector grew by 2 percent to 70 billion won compared with the previous quarter, as some popular mobile games ditched the Kakao Talk platform.

Daum Kakao, however, projected better earnings in the second quarter with its new, upcoming services.

“Daum Kakao will be launching a new mobile search service within KakaoTalk named #Search (Sharp Search), that allows users to search for content and information in the context of their conversation,” the company said in a statement.

“Other services aimed to connect online and offline businesses are currently in development for the second half of 2015.”

The CEO also announced on Thursday that it will spin off its popular line of cartoon characters, called Kakao Friends, associated with its messenger app.

The announcement follows archrival Naver’s report of weaker-than-expected earnings last month. The country’s top search engine declined in most of its businesses except for its mobile instant messaging application, Line.

Naver posted a 192 billion won operating profit for January through March, up 3 percent from a year earlier but still falling short of market estimates.