Female workers a focus in ‘Factory’

Female workers a focus in ‘Factory’ 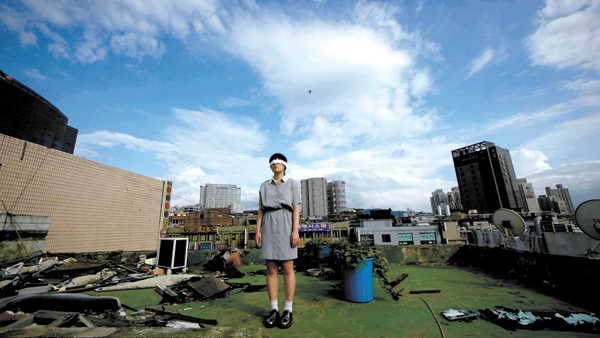 A still from the documentary feature “Factory Complex,” which won the Silver Lion at the Venice Biennale for its reflection of the dire conditions some female factory workers toil under in some Asian countries. The blindfolded woman symbolizes the suffocating environment inside the plants. Provided by the distributor

Im Heung-soon, the winner of the Silver Lion at the ongoing Venice Biennale, says he enjoys working on the verge of two distinct genres: art and film.

His use of both was certainly what made his award-winning, 108-minute documentary “Factory Complex” stand out from the rest of the artwork at the biennale’s 56th International Art Exhibition. The documentary was even screened in full at the event - an exceptional case.

“A lot of people ask me if this is artwork or a movie,” said the 46-year-old director during a press conference held on Thursday at Art Nine cinema in Dongjak District, southern Seoul. “I’d like to think of myself as an artist who works on borderlines of both genres.”

The film chronicles the dire conditions female factory workers in Asian countries toil under. The first half of the movie focuses on Korea’s modern history, between the 1960s and the 1980s when the country was going through a heavy industrialization period in which females laborers were required to work in factories. 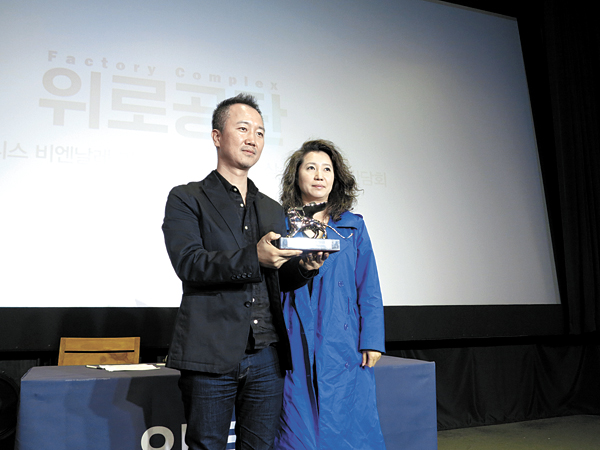 They were often called “gong-suni,” a Korean term with negative connotations that means “factory girls.”

“We first initiated the project thinking ‘where did all the women who worked at factories in Guro go?’?” said the documentary’s producer Kim Min-kyung, who also attended the press event.

Guro Industrial Complex, located in southwestern Seoul, was previously filled with manufacturing factories during the ’60s to ’70s.

It accommodated more than 5,000 businesses. But these are mostly gone now as Korea is no longer focused on this industry.

“Tracking the female workers who once worked there was the starting point. We wanted to convey our gratitude to them, who made it possible for our society to exist,” Kim said.

Director Im’s film was partly influenced by his mother, who worked at a sewing factory for more than 40 years, and his younger sister, who has a job at a department store’s apparel section.

“Watching their lives up close as a family member, I wanted to show both appreciation and apology to these women,” he said.

The latter part of the film looks more towards how female workers now are more prone to suffering from work-related stress rather than physical illness as a result of their jobs.

The two-year production process led Im to realize that these physically and mentally abused women were not unknown but “our own mothers and close acquaintances.”

A mysterious and grotesque ambience pervaded the eight-minute edited version of the film shown at the press event due to its random insertions of scenes as well as its interviews, photos and shots of blindfolded women standing still.

When asked about the intention behind implementing such a variety of methods, Im said, “I put a lot of interview scenes in because, aside from being informative, I wanted to reflect their gestures, eyes and way of talking, too.”

The shots showing several women standing motionless with their eyes covered are meant to express how they felt at these work places, Im said.

“When they worked in the factories, they couldn’t even open their eyes or breathe because of the dense dirt,” the director said. “Also, I wanted to represent the women from the factories as unidentifiable, with no face. It has multiple meanings.”

According to Im, his identity as an artist drove him to experiment.

“Because I have a background as an artist, I thought it was necessary for me to distance myself from the object,” Im said about the abstruse insertion of scenes. “I didn’t want the movie to be just a movie, I wanted to reflect reality at the same time.”

The filmmakers interviewed 65 relevant people at home and in other Asian countries for the documentary. Only 22 of these - one of whom is male - appear in the movie.

The film’s nationwide release date has not yet been confirmed.