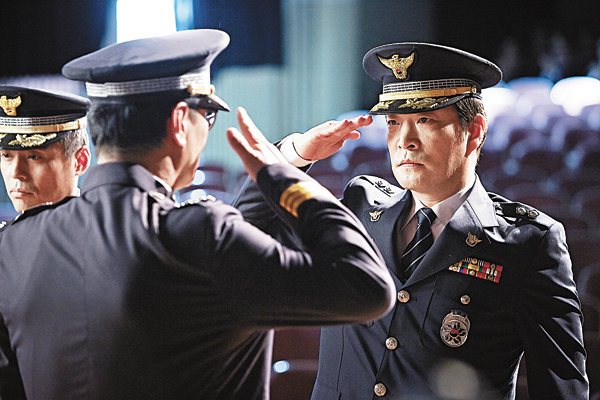 Son Hyun-joo, right, plays respected detective Choi Chang-sik, who finds himself in trouble after he kills a man in self-defense. Provided by the distributor

It is suspenseful and thrilling, one turn after another, in the just-released crime flick “The Chronicles of Evil,” directed by Baek Woon-hak.

The dominant theme may seem similar to last year’s box office hit “A Hard Day,” in which a detective inadvertently commits murder and then must investigate it himself - a dilemma that conflicts with personal morality and ethics.

But while the starting point may feel familiar, the rest of the film’s 102 minutes is a palm-sweating thrill ride filled with unexpected plot twists - worth the watch in itself.

Detective Choi Chang-sik (Son Hyun-joo), who is widely respected among his peers, including newcomer Dong-jae (Park Seo-joon), has only a few days left to obtain a promotion. After celebrating the honor in advance with his colleagues, he gets into a cab to go home, but while dozing off for a few minutes, the taxi driver takes him to a remote mountain trail, where he tries to kill him.

In defending himself, Choi ends up committing homicide. The film’s righteous protagonist attempts to call the police, though the thought of his family and colleagues’ expectations, coupled with his own ambitions, leads him to cover up the murder scene.

But it is only a day later when the dead body appears before his eyes, hung up on a crane in front of his workplace.

Nothing can be taken back now, with the case shamelessly exposed to the media and all eyes on Choi to solve the case.

As much as he tries to escape the crime, deleting the evidence and pointing to the wrong culprit, the situation only spirals downward as one of his colleagues Dong-jae becomes suspicious and a mysterious man in a veil appears and threatens to reveal everything he knows.

The series of events leaves the audience continuously guessing about Choi’s fate.

One of the reasons why it succeeds as a thriller despite its familiar plot line is that the film “closely focuses on the emotional lines of the characters,” according to Baek, rather than the external events themselves.

“It was stressful and lonely, having to play someone who has to hide so many things. I had to restrain myself quite a bit. I tried to fill in those gaps that come from my muted character,” the 49-year-old said during a press conference on May 6.

However, the experienced actor once again proved that there was no better candidate for the role, with Choi’s complexities and emotions flawlessly expressed through just his bloodshot eyes.

Although the film lives up to the hype it should have as a thriller, the moral lessons it tries to deliver concerning the legacy of crime and the evils of corruption and injustice fail to come through.

Maybe it is because the tension in each incident does not allow the audience to see the bigger picture, but one has to wonder at the picture’s conclusion whether the film had much of a message at all.

“The Chronicles of Evil” is the 26-year-old’s cinematic debut.

The film opened on Thursday to audiences nationwide.