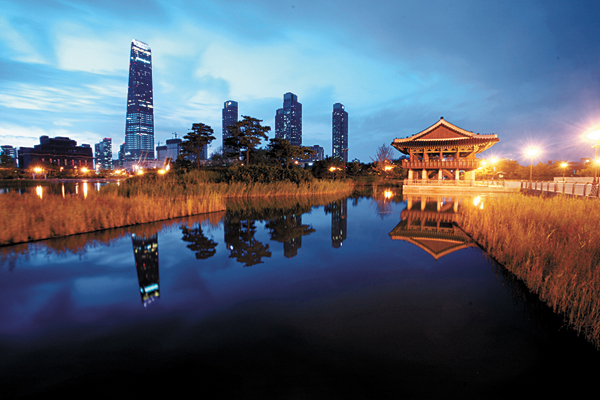 Songdo, a global business hub, has greatly contributed to the growth of the Incheon Free Economic Zone (IFEZ). On the right is the newly opened Gyeongwonjae, a hotel built in the style of a hanok (traditional Korean house). Provided by IFEZ

The Incheon Free Economic Zone (IFEZ) continues to grow, with ambitions to gain global recognition beyond the boundaries of Korea.

Established in 2003 as Korea’s first free economic zone, IFEZ covers three districts in the city of Incheon: Songdo, Yeongjong and Cheongna. These areas are centers of innovation and concentrated efforts have been made for economic growth for over a decade.

An incredible boost in foreign direct investment (FDI) last year proved the success of IFEZ. The annual goal was surpassed in the first half of the year. In the end, investment totaled $1.7 billion, which is roughly nine percent of the nation’s entire FDI, $19 billion.

Each district has its own unique features. Songdo, for example, is both a hub for economic activity and a convenient residence area. It emphasizes being compact, smart and green.

Being a compact city means that everything needed for living and business can be reached within 30 to 40 minutes of walking.

Songdo is well-known for being ecofriendly, as the city has emphasized cutting down carbon emissions and going green since 2011.

Water management has been especially prioritized. Recycled water is supplied for bathroom use and urban management purposes, while Songdo’s landmark Central Park is the first park in the country to have seawater flow through it.

The park has facilities to capture and store 5,000 tons of rainwater. By using the supply for landscaping purposes, water waste can be significantly reduced.

The district is also one of the most globalized areas in Korea. Thirteen international organizations operate here, including the Green Climate Fund, World Bank, Association of World Election Bodies and UNESCAP.

The Yeongjong district, on the other hand, is notable for the number of investors it has drawn with plans for development.

With many foreigners traveling in and out of the area, Yeongjong attracted the development of the Paradise Sega Sammy resort in November of last year. Another resort, a joint venture between Lippo Limited of Hong Kong and Caesars Entertainment of Las Vegas, is due to start construction in June.

Through the project, Incheon will be able to offer numerous job opportunities. The resort’s construction will create 8,000 new jobs until 2018, and the business itself will generate 35,000 jobs by 2020.

Cheongna has also witnessed diverse changes, with significant investment coming from Hana Financial Group. Last October, the corporation made the district its new home, relocating major facilities such as its headquarters, finance research center, IT center and human resources center to the area.

There have been many changes that will remarkably improve living conditions in the district. Cheongna station, on the Airport Railroad line, makes travelling to and from Seoul much easier. There is also a possibility that Seoul Metro’s subway line No. 7 may be extended to this district.

Although IFEZ has potential to further prosper as a free economic zone, support has been lacking in some aspects. The budget for this year was a little over 500 billion won ($456 million), 72.6 percent of which was derived from land sales.

Only 2.1 percent came from the support of the national treasury.

“IFEZ is in need of greater support in order to heighten the level of economic growth,” said IFEZ Vice Commissioner Cho Dong-am. “With timely adjustments made by the government, it will only be a matter of time that Incheon becomes a global hub for business.”