Shooter warned of spree for weeks

Shooter warned of spree for weeks 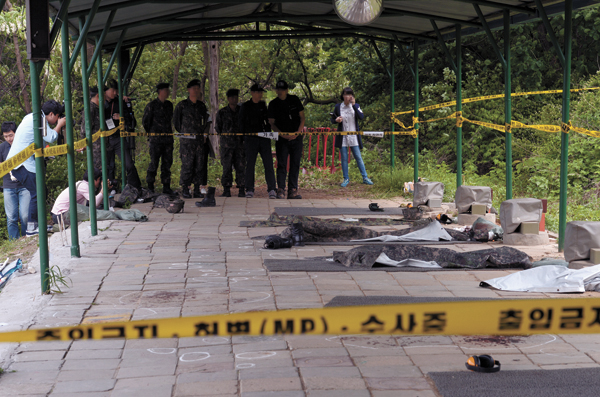 Investigators on Thursday inspect the scene of a fatal shooting on Wednesday at a firing range at a reserve forces training center in Seocho District, southeastern Seoul, which killed three, including the shooter.[Joint Press Corps]

“We are shooting tomorrow. I want to kill everyone and then kill myself,” read the suicide note found in the pocket of the Army reservist who went on a shooting spree Wednesday, killing two fellow reservists and injuring two before he turned his gun on himself.

“I regret that I missed chances to kill everybody and myself when I was at the GOP [a frontline guard observation post].”

The shooter, surnamed Choi, is believed to have written the note on Tuesday, the first day of his three-day reserve forces training session at a training center in Seocho District, southeastern Seoul.

As he entered the shooting range on Wednesday with a K-2 rifle and a magazine with 10 bullets, he fired only one round toward the target before firing seven bullets at fellow trainees. He used the ninth bullet to fatally shoot himself in the forehead.

Choi was on the left end of 20 firing lanes at the shooting range. The other two fatalities were a reservist surnamed Yoon, who was waiting behind Choi for his turn, and another surnamed Park, who was two lanes over from Choi’s.

The Army believed that Choi planned the spree in advance given the content of the suicide note found in his uniform pocket, and text messages he sent to his friends in April.

According to Col. Lee Tae-myeong, head of the Army’s central investigative unit, Choi sent a friend a text message on April 22 that read, “I’m a dead man on May 12, farewell.” He sent another on April 25 that read, “May 12 is the last day.” A message sent on May 5 read, “Reserve forces training [is coming]. You know [what will happen] and I don’t have to tell you.” Choi’s three-day training began May 12.

“According to his family members, he’s been treated three times at a mental hospital for hyperkinetic disorders, and his friends say he had depression and bipolar disorder since he was a middle school student,” Lee said. “He was also treated three more times for adjustment disorder after finishing military service [in 2014].”

When asked how Choi could join the Army as an ordinary recruit in 2012 with a history of treatment for mental disorders, the Army said it is difficult to track down someone’s mental health records if the applicant doesn’t voluntarily submit them.

The Army also said that instructors at the scene Wednesday did not stop Choi but fled, although the guidelines say they should suppress a shooter. The Army said they will be investigated and punished if found guilty of violations.

“I could barely sleep because I felt anxious and uneasy,” said 23-year-old trainee Kim. “We barely talked to each other and just stayed in the barracks for the rest of the day.”

Some of the trainees complained of post-traumatic stress disorder (PTSD). Another 26-year-old trainee who witnessed the incident said, “I have talked to a psychiatrist at the Armed Forces Capital Hospital and I was given a written confirmation [for PTSD]. I still don’t feel it’s real.”

A reservists named Yoon, 29, said he was given a PTSD survey after the incident. “We couldn’t sleep well at night because we felt sorry that people died, and we talked about the accident until late into the night.”

“After the accident, we came back to barracks but did not get close to each other,” said another trainee surnamed Kim, 25. “People didn’t seem to trust other people, thinking that some of them might have brought rifles to the barracks.”