Shooting star shows no signs of burning out

Shooting star shows no signs of burning out 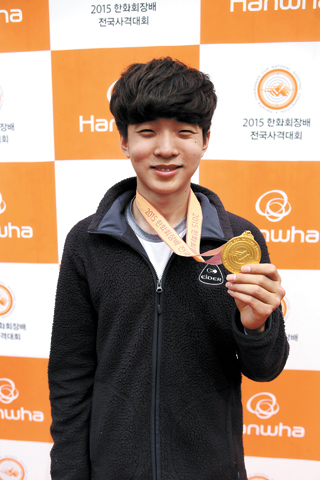 Kim first made headlines during the 2014 Incheon Asian Games when, at 17, he became the youngest Korean shooter to ever take two gold medals, winning the men’s 10-meter pistol individual and team events.

After the games, even world record holder and Olympic champion Jin Jong-oh said his performances marked the “birth of new hero.”

The lefty shooter’s heartbreaking family story also resonated with Korean fans. Kim’s father passed away due to medical malpractice around the time Kim began training. After taking the top prizes at Incheon, Kim looked to the sky with tears in his eyes.

Kim has kept up his dominance this year, sweeping the nation’s largest shooting event April 25.

“I’m just happy and it feels good to win,” Kim said April 27 in an interview with Ilgan Sports, a Korea JoongAng Daily affiliate.

Despite the attention that he has received for his shooting skills and personal story, Kim maintains that very little has actually changed in his daily life.

“It did change temporarily, but nothing changed dramatically,” he said. “People’s attention hasn’t disappeared completely, but I’m an athlete - I don’t try to get extra attention.”

The Heungdeok High School student said he did not like his family mentioned in stories, and that he felt sorry for his friends who experienced extra scrutiny while walking with him on the street.

Still, he says that the Asian Games are a memory he will never forget.

“Whenever I think about the Asian Games, it still feels like a dream,” he said. “I want to go back to that time.”

Kim’s victory in Incheon particularly caught people’s attention because it was over his idol Jin, who has three gold medals and two silver medals in the Olympics. But Kim denies that he and Jin are comparable.

“Some people say that if you beat him once, you can do it again,” Kim said. “But Jin isn’t that kind of player. He’s on a different level.”

Now 18, Kim said that he still has Jin’s autograph hanging on his wall.

“It’s just an honor that I can train with Jin,” he said.

Kim will join the Hanwha Galleria Shooting Team when he graduates high school next year. His dream for now is to play with Jin at the 2016 Summer Games in Rio De Janeiro. Despite good performances in other local events, Kim and Jin will have to pass through national team selection trials in order to earn spots for the quadrennial event.

“I first have to be in a ‘do-or-die’ mode for the national team selection and then I want to think about getting good results in the Olympics,” he said.

Kim knows there is still a long time left in his shooting career and said he will not rush to get results.

“I know there are many things left to do,” he said.

“I will go forward as I do in competition - shot by shot.”