As a motivated seller, government relents and rezones

As a motivated seller, government relents and rezones 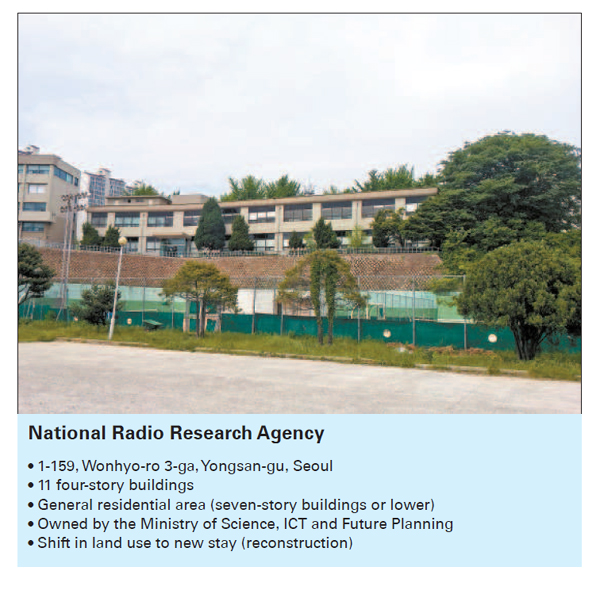 The former headquarters has been put up for auction 13 times, but there were no buyers because the land was restricted to general residential use that allows only buildings of seven stories or fewer.

In response, the government decided to reclassify its unsold land as “new stay” to be used as rent-controlled apartments for middle-class households. When sold, the new owner of the land will be able to develop high-rise apartments.

A total of 154 government-run companies and organizations are moving from Seoul and Gyeonggi as part of efforts to develop other parts of the country. About 70 percent have already moved and 29 are scheduled to move. 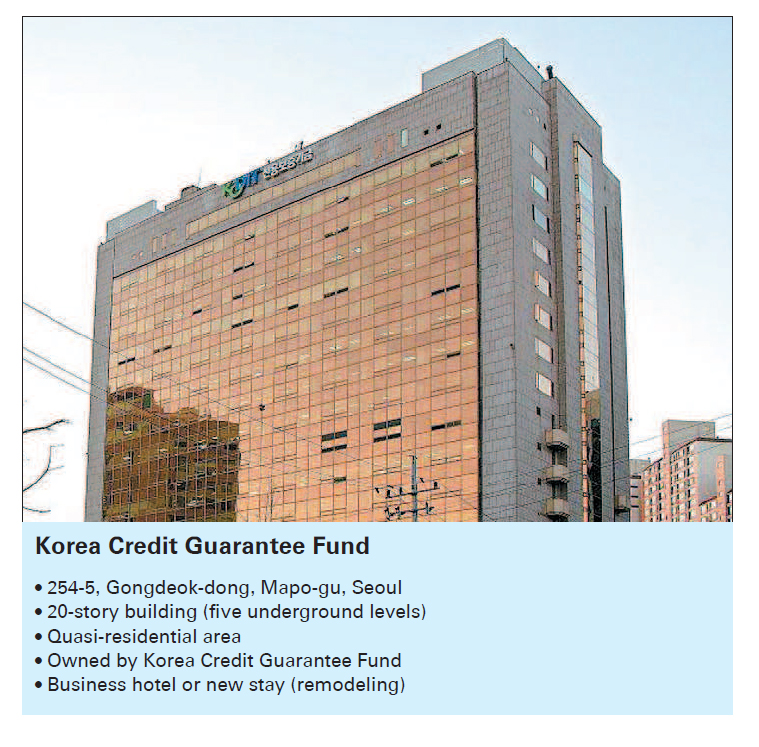 To increase the income potential of the land and avoid selling at bargain basement prices, the government decided to rezone the land as new stay or business hotel, both of which permit construction of high-rise buildings. With the reclassification, selling the 29 remaining sites could generate an estimated 2.1 trillion won ($1.9 billion). The Ministry of Land, Infrastructure and Transport will hold a seminar at the Korean Chamber of Commerce on Thursday to provide directions for the development of each parcel. 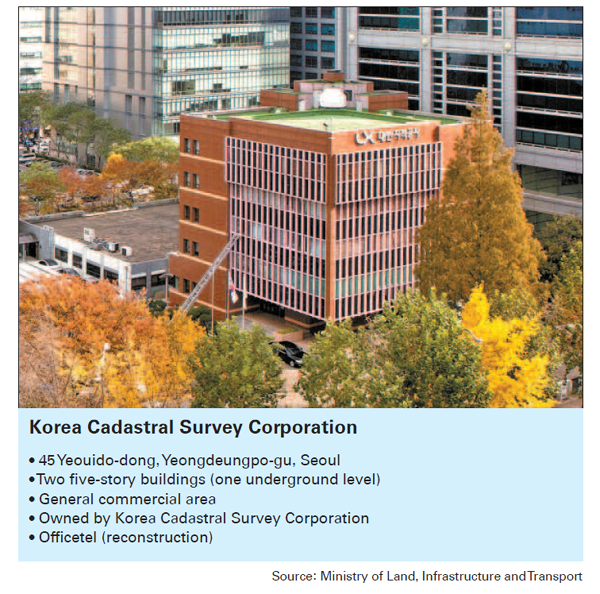 For 19 sites, it will not be the first auction; 10, including property of Korea Cadastral Survey Corporation, Korea Housing Guarantee Corporation and Health Insurance Review and Assessment Service, will be on the market for the first time.

Those located near subway access are ideal for new stay use. The former headquarters of Korea Credit Guarantee Fund near Gongdeok Station in Mapo District, western Seoul, also will be sold for new stay or business hotel use. The building was originally a hotel, but changed to offices as the government took it over. It has been put up for auction as an office building since 2012, but investors were put off by the 100 billion won asking price and the real estate market downturn.

Now that the building can be returned to its original use, it is expected to fetch a good price.

But current law bans hotel businesses in school zones. The tourism promotion bill, currently pending in the National Assembly, would allow hotels to be built near school zones. 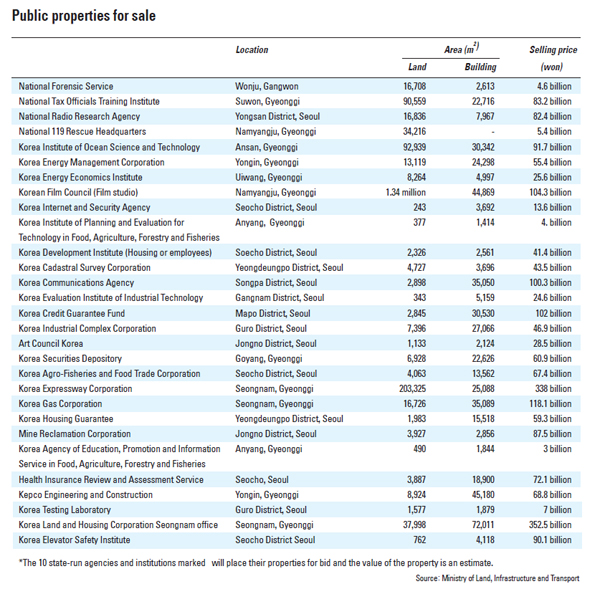 However, passage of the law would not guarantee the success of sales, as it has not been easy for the government to move its property.

The government’s policy relocating public institutions was developed by the Rho Moo-hyun administration, but sales started during the Lee Myung-bak administration when the real estate market was in a slump. That resulted in lower prices and many unsold properties. For example, the former site of Korea Land and Housing Corporation (LH) in Bundang, Gyeonggi, was sold for 2.4 trillion won, 13 percent lower than the appraised value of 2.8 trillion won, while another site in Bundang - appraised at 3.5 trillion - remains unsold.

On the other hand, the sale of the Korea Electric Power Corporation (Kepco) site was a spectacular success.

In September, Hyundai Motor purchased the former headquarters of Kepco in Samsung-dong, southern Seoul, for 10.6 trillion won, more than triple its appraised value. Kepco, relocated to Naju, South Jeolla, decided to invest the proceeds and pay down debt.

The success of Kepco made investors pay attention to other government-owned real estate on the market. Eight former public institution properties sold this year, including the Small and Medium Business Corporation and Road Traffic Authority. Two of the 29 unsold properties are expected to be bought soon. The former site of Korea Expressway Corporation at Seongnam, Gyeonggi, is slated to be sold to LH in the first half of next year as the site was included in the Second Pangyo Techno Valley Project. Arts Council Korea’s building at Daehak-ro in central Seoul is now owned by the Ministry of Culture, Sports and Tourism and will be remodeled as a culture center for the disabled.

“It’s a good idea to adopt a policy like new stay for the sales of government-owned real estate,” said Kim Seung-bae, president of Fides Development, “But what’s at stake for the sales to succeed is easing relevant regulations.”