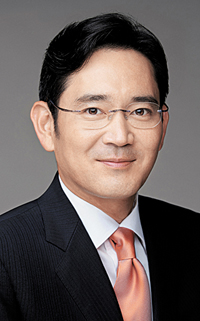 Samsung Electronics Vice Chairman Jay Y. Lee, the only son of the Samsung Group’s chairman, has been appointed chief director of Samsung’s two cultural and charity foundations on Friday, another step in his taking control of the country’s largest conglomerate.

The 47-year-old will serve as chief director of the Samsung Foundation of Culture and Samsung Life Public Welfare Foundation, replacing his frail father, Samsung Chairman Lee Kun-hee. The announcement came as the older Lee remains hospitalized after he suffered symptoms of cardiac arrest last May.

Samsung Group said in a statement that the vice chairman “is the one who can understand the founding principles better than anyone could.

The two foundations are considered an important part of Samsung’s complex shareholding structure, though they don’t engage in profit-making businesses.

In 2012, the heir apparent was appointed as member of the Samsung Life Public Welfare Foundation for the first time. But a year later his name disappeared from the board.

Although Samsung is trying to keep the succession machinations under the radar, the recent stake purchases by Jay Y. Lee of Samsung’s financial units as well as the IPO debuts of Samsung SDS and de facto holding company Cheil Industries are all interpreted as signs he is increasing his clout within the conglomerate.

The IPOs of SDS and Cheil Industries are expected to help raise money he will need to pay inheritance tax estimated at 7 trillion won ($6.4 billion).

The listing of Samsung SDS in particular was in the spotlight as the technology service arm of Samsung Group is considered a key subsidiary in the succession process, with Jay Y. Lee owning an 11 percent stake.

In the meantime, the value of shares owned by three children of the chairman increased threefold between 2014 and 2015, according to CEO Score.