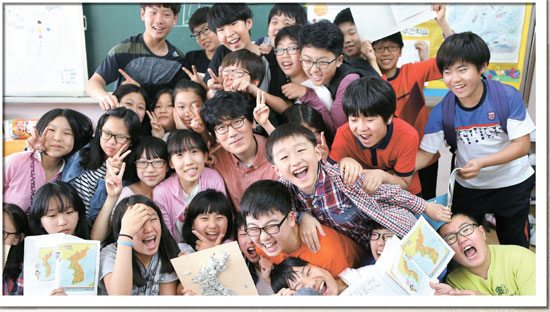 Students in Lee Kyung-won’s sixth-grade class at Modang Elementary School in Goyang, Gyeonggi, surround their teacher for a photo. The students hold up the maps of the Korean Peninsula they made in class. By Shin In-seop

It was a normal Wednesday at Modang Elementary School in Goyang, Gyeonggi. Students in 43-year-old teacher Lee Kyung-won’s sixth-grade class had thin pieces of plywood in their hands.

“Today we’re going to be making a map of the Korean Peninsula. I trust you’ll all do well?” asked Lee. His students gave a resounding yes. They drew their own maps onto the plywood, looking at their teacher’s model for help. Using paper drenched in sticky rice paste, they added 3-D mountains and mountain ranges onto their plywood strips. As they worked, some of the students playfully complained that their peninsulas were too fat or that the rice paste felt weird.

The students’ textbooks were nowhere to be seen.

“Well, we keep our textbooks in our lockers but we hardly use them. We mostly use notebooks for class,” explained 12-year-old student Park Yeon-chan. Stapled inside one such notebook was a six-page handout including a brief explanation and map of the Korean Peninsula. 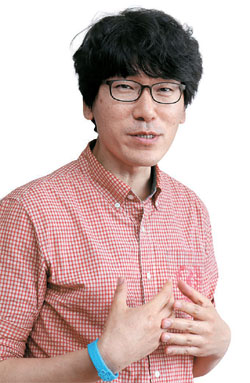 Lee, who is in his 17th year of teaching, has cast aside textbooks.

“The textbooks are more complicated than they need to be,” said Lee.

Instead of using standard textbooks, Lee prepares a variety of learning materials that are easier to understand while still keeping in mind the Ministry of Education’s curriculum guidelines. He only uses the standard textbooks to help him create his own material.

“With the belief that textbooks are not holy books, many classes are taught freely, sometimes combining subject matter, with the national curriculum objectives in mind,” noted Lee, referring to a discussion he had with other sixth-grade teachers.

Lee traced his practice of reconstructing teaching materials back to a conversation he had with one of his students in 2009. Lee said that when he asked his student if he remembered anything he learned in class, the student replied no, an answer that disheartened Lee to the point of tears.

This led Lee to the question of what makes a good teacher. In his search for an answer, Lee spent most of last year, his sabbatical, meeting 68 school teachers across the country who he had heard were exceptional. He traveled to meet with each one, journeying a total of 8,336 kilometers (5,180 miles) and logging more than 144 hours of interviews. His trip was publicized on EBS, a state-run educational television channel.

Lee particularly remembers his meeting with Choi Hye-gyeong, a teacher at Daegu Deulangil Elementary School in Daegu. Lee observed Choi ask her students the following question: “For every sausage that Lava Yellow eats, Red eats two sausages. Then if Yellow eats three sausages, how many sausages will Red eat?” Choi’s students replied, “Four is too few and six is too many.” Instead of telling his students they were wrong, Choi responded by saying that it was possible they could have come to that conclusion and had the students debate with each other to find the right answer.

Watching this scene, Lee felt as if he had finally gotten a look inside the students’ minds.

Modang Elementary School’s sixth-grade class does not have a daily class schedule. Lessons for the day are determined by the progress of the students and their responses to classes so far. When the school day is over, instead of exchanging a formal greeting with Lee, each student leaves school after giving him a high-five.

When Lee taught the word “advertisement” in a Korean-language class, he brought in a school lunch and asked his students to advertise it. A class on language became a practical one as well, with the meal’s side dishes becoming his teaching material.

“He knows how much we are able to understand and teaches accordingly. Class seems to go by very quickly,” noted Park Shi-hyun, 12, one of Lee’s students.

From his trip, Lee concluded that a teacher is not an entity who helps students.

“The word ‘help’ suggests that their [the students] problems are not mine,” he said. “A truly exceptional teacher does not separate their life as a teacher from their personal life and should be able to read a child’s thoughts by just looking into their eyes.

“A teacher does not become a teacher just by graduating from a university of education. Becoming a teacher requires one continue that process of learning and questioning themselves as soon as one steps behind a lectern to teach,” he added.