In July 2014, Glendale’s public library held a cultural event under the theme “Do the Right Thing!” Above is a work by artist Kim Jung-gi, who created the drawing on the spot during the event, looking at Glendale’s comfort women statue for inspiration. Provided by Jeon Hye-yeon

Jeon Hye-yeon, 42, was out with a friend in Glendale, California, last year when she saw flowers left by a U.S. lawmaker on the city’s monument for Korea’s so-called comfort women.

The same lawmaker was later quoted in a Japanese media interview as saying, “One cannot deny Japan’s role in the history of comfort women.”

Comfort women are the women and girls - mostly Korean - who were forced into sexual slavery by the Imperial Japanese Army during World War II and made to serve in military brothels.

Something clicked for Jeon when she saw the memorial that day. 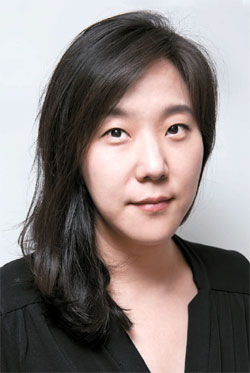 “The statue for comfort women is a symbol of resistance against Japan’s efforts to erase history,” Jeon Hye-yeon said.

“Someone who wasn’t even Korean was making a statement toward recognizing the issue of comfort women, and the fact that we [Koreans] weren’t saying anything is reprehensible,” she said, adding that she couldn’t forget the shame she felt at the time.

Believing it was time Koreans took on the issue as well, she proposed the creation of a cultural event to raise awareness around Korean Comfort Women Day.

The city of Glendale recognizes July 30 - the day in 2007 when the U.S. House of Representatives adopted a resolution calling on Japan to apologize to the victims and face up to its wartime past - as Korean Comfort Women Day. Glendale is the only city worldwide to have dedicated a day in remembrance of the victims, and one of the few cities to have erected a statue memorializing them.

As Jeon became more involved, the need for action became increasingly apparent. She observed that thousands of emails, mostly from Japan, in protest of the comfort women statue were sent daily, yet Koreans hadn’t sent even one email of gratitude for the city’s efforts.

A group of Japanese-Americans had even filed a lawsuit asking a federal court to remove the statue, which was dismissed. A second case seeking the removal of the memorial was also dismissed in February by the Los Angeles County Superior Court.

Japanese-Americans have continually appealed the decisions on the statue thus far and are looking to take the case to the U.S. Supreme Court. In order to protect it, Glendale must spend taxpayer money, which residents could potentially come to see as a problem as the suits continue.

The Japanese plaintiffs have already collected more than $150,000 in another effort to sue the city.

Jeon helped direct the first commemorative event for Korean Comfort Women Day from July through August 2014, in Glendale. The event featured art depicting the atrocities of the past and performances relevant to the comfort women’s tragic history. Approximately 1,400 people attended the event, including several American politicians.

“Last year’s funds for the commemorative event were raised entirely by U.S. locals, but in order to keep the event going we can’t rely on their contributions alone. We need to have support from Korea as well,” Jeon said.

For that, she started a crowd-funding effort, “For the Price of One Coffee,” and since then, Glendale’s sister cities, including Gimpo, Gyeonggi; Gosung County, South Gyeongsang; and Boeun County, North Chungcheong have begun to show an interest.

Following the event in Glendale, which will run again this year from July through August, Jeon plans on holding an event in Beijing in September and another in Seoul in October.

“Why should these events only be held outside Korea? Even after 10 years of demonstrations in Korea, Japan has not batted an eye,” she said. “But the Japanese did react to the event in Glendale, going so far as to file lawsuits. If we can continue these events and have support from other places in the world, these waves of action will encourage Japan to acknowledge and apologize for its past wrongdoings.”