Man returns after sailing around globe

Man returns after sailing around globe 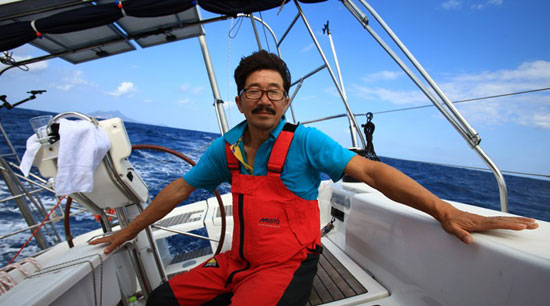 Kim Seung-jin is photographed shortly after taking off on his around-the-world voyage last Oct. 18. Provided by Kim Seung-jin

Captain Kim Seung-jin, who set off on a round-the-world sailing trip from Port Uimok in Dangjin, South Chungcheong, on Oct. 18, is returning to Korea after 210 days at sea.

The journey makes him the sixth person ever to have sailed solo without making a single stop or seeking assistance. He is also the first Korean to have achieved the feat.

When the Sewol ferry sank in 2014, Kim decided to sail around the world to “spread hope.”

Kim is said to be in good health and is navigating his yacht, Aparani, at an optimal speed to make a timely return home.

“There were times when I was fearful about the boat - of it tipping over. But I persisted as I wanted to give hope to Koreans who still mourn the ferry sinking,” Kim said in a satellite phone interview with the Joongang Ilbo.

Kim is currently sailing in the sea near Port Pyeongtaek and is expected to arrive at Port Uimok by 3 p.m. today.

A welcome ceremony will be held upon his arrival, with Minister of Oceans and Fisheries Yoo Ki-june and South Chungcheong Gov. Ahn Hee-jeong giving him a personal welcome at the port. A celebratory concert will also be held.

After graduating from Hansung University with a fine arts degree in 1989, Kim started off as a broadcast producer of environmental programs.

He has enjoyed swimming since college and has often swum across the Han River. He first learned yachting in New Zealand in 2001 and has continued honing his sailing skills since then, taking a trip from Croatia to Korea in 2010 and 2011, and later from the Caribbean Sea to Korea in 2013.

On the yacht, he ate only rice, dried fruit and seeds. When rough waves brought him squid and flying fish, Kim was able to feast.

“I sailed as much as I wanted to each day, enjoying small happiness everyday along the way,” Kim said.

“Men become humble before nature. I would like to share the wisdom I learned from nature through lectures and broadcasting activities,” he said.

Using his skills as a former documentary producer, Kim has meticulously recorded his journey.