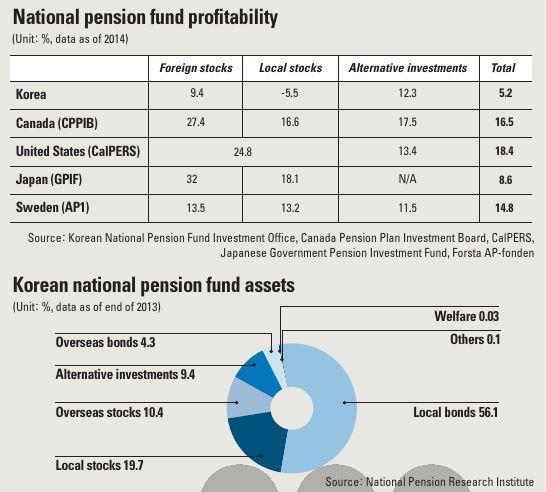 In an urgent call for systemic reform, a state-run economic think tank warns the national pension fund needs to establish a detailed long-term management goal and expand overseas investment to cope with the financial pressures of Korea’s fast-aging society.

A report released by the Korea Development Institute (KDI) on Sunday says the national pension fund’s investment portfolio is too focused on local stocks and bonds. Such holdings account for 30 percent of the local stock market.

“Under the national pension program’s current system, the fund is likely to face rapid expansion and reach depletion rapidly, which would require massive liquidation [of bonds and stocks], causing a shock to the local capital market,” Yun Hee-sook, director and vice president of the public finance and social policy department at KDI, wrote in the report. “The fund should reform its governance structure by hiring more finance experts on the board and strengthening their responsibility and role, which should be determined based on the long-term fiscal goal.”

The KDI said it is especially problematic that the fund’s primary investment tool is local stocks and bonds, which should be replaced with overseas stocks.

As of the end of 2013, the national pension fund was about 484 trillion won ($446 billion), 333 trillion won of which was comprised of pension premiums paid by workers, while150 trillion won of the total amount consisted of investments.

Referring to data from the National Pension Fund Estimation Committee in 2013, the KDI said the balance in the fund would reach 49.4 percent of gross domestic product in 2035 and its largest level of 2,561 trillion won in 2043. However, the committee estimated the pension fund would start to erode in 2044 and steadily decline until it is depleted in 2060.

“Such rapid expansion of the fund and even speedier depletion are problematic,” wrote Yun, saying the management board should set up different response plans linked to the size of the fund and diversify investments.

The KDI criticized the pension fund investments as too conservative with most assets in bonds, wrote Yun, mainly due to lack of expertise on the Fund Management Board. She called for a major overhaul in the board’s governance structure.

“Every 1 percentage point increase in profitability is estimated to delay the depletion date by eight years,” Yun wrote.

Currently, the management board is headed by the minister of health and welfare, while only two of 18 commission members are finance experts.

According to the National Pension Research Institute data at the end of 2013, 60.4 percent of the total national pension fund assets was invested in bonds, while only 30.1 percent was in stocks. The rest was invested in public real estate and infrastructure projects, and private instruments like start-up funds and private equities.

“Bond investment is more suitable during times when the fund needs mass liquidity,” Yun wrote in the report. “Instead, the national pension fund should invest more aggressively, particularly in long-term programs, because it has some time before the fund starts to decline.”