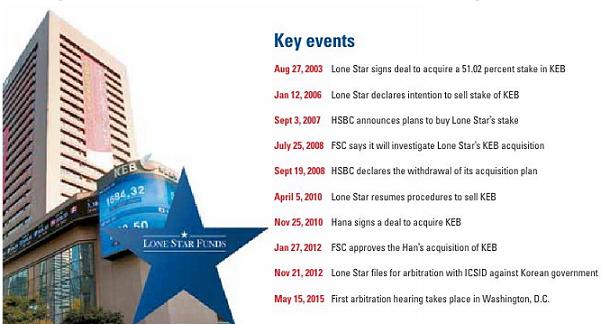 Arbitration between Lone Star Funds and the Korean government began in Washington, D.C., last week, with the U.S. company demanding billions of dollars in compensation for interference in its business in Korea.

The first hearing began Friday at the International Centre for Settlement of Investment Dispute (ICSID), an international tribunal under the World Bank.

The Korean government sent a group of officials from the Ministry of Justice, Ministry of Strategy and Finance, Financial Services Commission (FSC) and Financial Supervisory Services on Wednesday to oversee the case.

This is the first investor-state dispute (ISD) to be filed against the Korean government under the ISD clause in the Korea-U.S. Free Trade Agreement that took effect in March 2012. The clause allows companies and investors to file for arbitration in the event of a dispute with a foreign government.

Although most information on the arbitration was not revealed to the media, Sim Sang-jeong, the floor leader of the opposition Justice Party, said some high-ranking officials who were previously involved in the case attended the hearing as witnesses.

“According to a document we recently received, Han Duck-soo, a former prime minister [who was a finance minister at the time], and Kim Seok-dong, former FSC chief, are going to attend the tribunal,” she said in a speech at the National Assembly on April 13.

According to the ICSID’s website, the U.S. fund sent lawyers from Sidley Austin, a major U.S. firm, as its representatives.

Although it usually takes at least a year for the tribunal to issue a final ruling, arbitration could be achieved within a few months if both parties reach an agreement on compensation.

The Dallas-based private equity firm claims the fund suffered damages due to interference in its attempts to sell its stake in Korea Exchange Bank to Hongkong Shanghai Banking Corporation in 2007 and 2008.

The attempt was thwarted, however, by an ongoing probe by Korean prosecutors into claims that government officials sold stock of the state-run exchange bank on the cheap after being lobbied by the U.S. firm. In the midst of the probe, Lone Star Funds Chairman John Grayken withdrew the plan to sell the KEB stake to Kookmin Bank in November 2003.

In September 2007, Lone Star found another partner, Hongkong Shanghai Banking Corporation, sealing a deal to sell its shares of KEB for about 5.9 trillion won.

But the deal was scrapped in June 2008, when a Seoul court ruled Lone Star was guilty of manipulating stock to acquire KEB Card. In September 2009, Lone Star and HSBC discarded the agreement on the acquisition of KEB.

Although Lone Star finally managed to sell its stake to Hana Financial Corporation for about 3.9 trillion won - in excess of 2 trillion won more than it paid - the U.S. firm claimed it would have earned more money if the deal with HSBC had been made, and the Korean government should compensate it for delaying the deal’s approval.

The Korean government has maintained its position on the claim, saying it couldn’t approve those deals quickly because of the two ongoing investigations.

Another contentious point is the taxation issue. Lone Star says the Korean government imposed “unlawful” capital gains taxes on its real estate investments in Korea, citing a tax treaty between Korea and Belgium.

Lone Star says there is no reason for it to pay about 800 billion won levied by the government on its profits through investing in KEB and several buildings in Korea, including the Star Tower, now Gangnam Finance Center, in southern Seoul. The company says those investments were made in the name of subsidiaries in Belgium, not Lone Star’s headquarters in the United States.

The investments, it claims, should be protected by the Korea-Belgium bilateral investment treaty, which imposes no tax on overseas investment made by companies in Belgium.

For damages, Lone Star demanded about $4.6 billion in compensation from the Korean government.

While Korean officials refuse to comment on the ongoing case, a group of lawyers in Korea criticized the government for being too opaque.

Lawyers for a Democratic Society released a statement on Friday demanding that the government make the legal proceedings public because the case could cost billions of won in taxpayer money.

The group sent a request to the tribunal to attend the hearing, but on Thursday it was notified by the tribunal via email that “both parties have objected” to its request.

“We assume the government is so secretive in the case because most of the officials who are currently working on the case are those who are alleged to have sold KEB at a cheap price to Lone Star,” said a member of the group by phone.