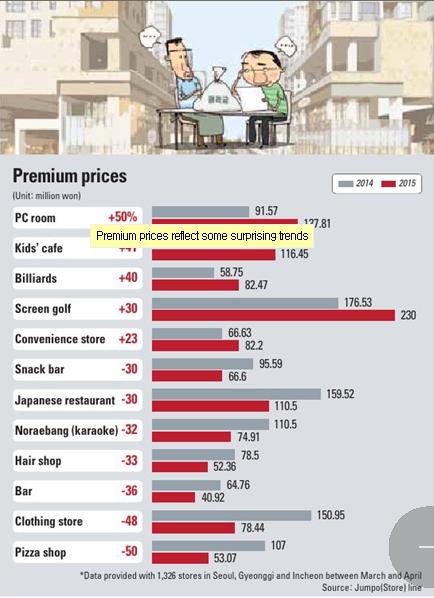 The premium price for PC rooms (Internet cafes) mounted, while the price for Japanese restaurants fell in Seoul and metropolitan areas - Gyeonggi and Incheon.

In the Korean real estate market, “premium” refers to the money a new tenant of a store traditionally pays to the previous lessee. It is neither monthly rent nor a security deposit to the landlord.

Such deals are generally made among merchants and the price gets higher when a store is located in a good location that attracts customers. One of the factors considered is any amount spent on renovations.

According to real estate data from Jumpo Live, an online provider of commercial information, looking into the premium prices for 1,326 stores registered for rent in March and April, PC rooms showed the biggest premium price increase over a year of 50 percent, or an average 137.81 million won ($127,119).

PC room owners have gone through a hard time due to government policies that prevent anyone younger than 16 from playing games from midnight to 6 a.m. and ban smoking in public places, including restaurants and PC rooms.

But the number of PC rooms has declined so much since 2011, that demand has increased.

But the price for Japanese restaurants (87.11 million won) and pizza stores (53.07 million won) dropped by 50 percent each from a year ago, due to an oversupply of establishments since 2010.

The business with the most expensive premium price was screen golf, followed by bakeries (227.9 million won). The price for a skin care shop was 50.9 million won. The average premium price around Seoul and metropolitan areas was 99.46 million won, a drop of 19 percent from a year ago.