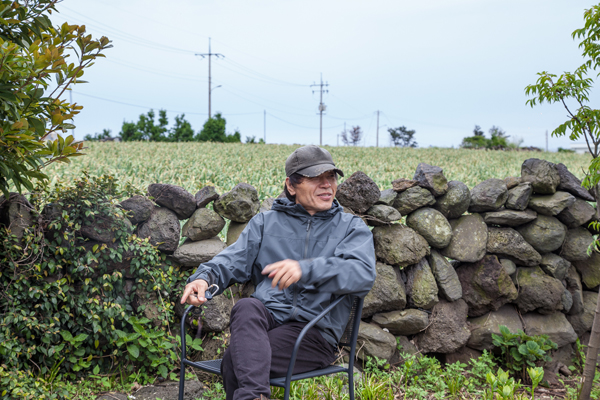 “A Petal” was the first full-length movie to deal with the Gwangju Democratization Movement, the student-led pro-democracy movement in Korea in the 1980s. It portrayed the generation’s violence and misery using a sexual metaphor.

In “Bad Movie,” Jang explored the lives of juvenile delinquents who do things like sniff adhesives and commit gang rape, and “Lies” depicted the sadomasochistic sexual relationship between its male and female characters.

In other words, Jang has never been one to shy away from controversy.

The director drew from his own life experiences when making his films. When he was a teenager, he went in and out of a juvenile correction facility for bad behavior and was ultimately expelled from school.

He then devoted himself to Buddhism and stayed at Naeso Temple, located on the Byeonsanban Peninsula, North Jeolla. He was later accepted into Seoul National University’s anthropology department.

Jang’s work has always gotten people talking, but he hasn’t always been successful. His biggest failure was “Resurrection of the Little Match Girl” (2002). Although around 10 billion won ($9,116,000) was invested into the movie, it was heavily criticized by audiences and flopped. As a result, the director had a hard time getting investors for his other projects, and several of those films had to shut down due to a lack of funds.

“Resurrection of the Little Match Girl” turned out to be his last work as a director. In 2005, Jang left Chungmuro, central Seoul, for Jeju Island, and has stayed out of the spotlight ever since.

Q. How are you doing these days?

A. I’m building a guesthouse on Jeju Island. It is under construction right now and I’m actively working as an assistant at the working site. It will open at around July or August. (Laughs)

Before coming here, I was preparing to direct the film “A Thousand Plateaus” in 2003, but it didn’t work out, which made me feel really depressed and frustrated.

To confine myself I chose Jeju to live in exile. But after coming here, too many acquaintances visited me. I guess they were curious about how I was living. So I couldn’t live the quiet life that I had imagined, which is the reason I’m moving to a small house near Seongsan Ilchulbong [the island’s so-called Sunrise Peak]. I will quietly study and meditate there.

Why did you pick Jeju Island as your new home?

I thought that Jeju is a place where lazy people can stay for a long time. I used to have itchy feet, but considering that I have been living here for 10 years, I guess I no longer have it anymore. In the past, I liked to tire myself out by travelling to various places. Right now, however, I prefer to travel more comfortably. I have an ideal image of happiness, which is quietly meditating under a palm tree somewhere in the South Pacific. When I bask in the sun here in Jeju, I sometimes feel as if I’m in that somewhere in the South Pacific. I guess Jeju gives me that much pleasure.

Does it mean you’ve finally found the life you were looking for?

I’m still finding answers for how I should live my life and how I can find true happiness, which are the questions I’ve asked since I was a teenager.

In the past, I sometimes wandered off in the wrong paths to find those answers and I was very frustrated for not being able to find them. So, the movies that I directed were my way of expressing my frustration. But after coming to Jeju, I think I at least found the direction of my life.

Then what do you think about your previous work “Resurrection of the Little Match Girl?”

I think it deserved the criticisms. (Laughs) I believe it was a good chance for me to look back on myself. It was wrong for me to try to evaluate the audience by how much they can understand the Diamond Sutra [a central text of Indian Buddhism], which is the concept that even I didn’t understand. It wasn’t right to set the topic as the theme of the movie.

I heard you are working on the revised edition of your book “Tathagata?”

It is currently being translated into English. It’s actually difficult to translate a book that contains more than 190 footnotes. This book is a kind of introduction to Buddhism, and can also be seen as an academic text. I think Buddha is the best teacher in the world. I truly wish to see him in a movie. If I could make a movie based on Buddha, I want to make it in an animation.

Why do you want to make it in an animation?

There is so much to talk about Buddha and I want to make it a global project, so an animation makes sense to me. I think it would be a great idea to pay homage to Buddha using animations from the United States, France and Japan. In fact, this project is so experimental that I’m not even sure whether I would be able to put it in action. But I think it’s meaningful that I set challenges for the Korean movie industry.