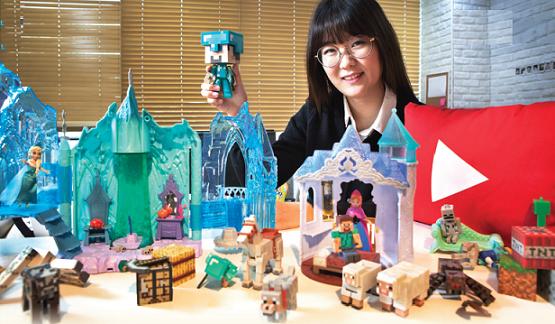 Yang Ji-young, better known as Yangdding, poses behind the characters of Minecraft, one of the online games she enjoys playing.

Yang Ji-young has formed the unusual habit of filming every trivial incident that happens in her daily life.

But because of her goofy and lighthearted personality, even making ramen or feeding her dog becomes worth watching, and this is proven by the fact that she easily attracts more than 200,000 views for each of the homemade videos she uploads to her YouTube channel.

Yang who is better known by her nickname Yangdding, or YD, is a YouTube superstar in Korea who runs multiple channels, one of which has more than 1.2 million subscribers - the largest number for an individual content creator in this country.

Her career in the wired world started as a vlogger, or a video blogger, on AfreecaTV, a streaming service based in Korea. She began by uploading videos of herself playing online games and commentating at the same time.

YouTube star Yang Ji-young finds ideas for her video content from her daily life. She eats a newly launched set meal from KFC, left, and tries making a new pudding product from Japan, center. Also, the 25-year-old enjoys traveling, which led her to create video content based on her trip to Japan. Provided by Treasure Hunter

The vlogger switched to YouTube two years ago and expanded her spectrum to eating, traveling, cooking and more. With a little bit of “Yangdding” in it, every object magically turned into something interesting.

Recently, her career has expanded to launching a mobile app as well called Yangdding TV, where her followers can easily watch her newly uploaded videos.

However, it seems like her biggest success is yet to come. With everything she has achieved so far, no one could predict what she has to offer next.

“Filming the things that don’t seem to attract attention is the key to the popularity of my videos,” said the 25-year-old in a recent interview with the Korea JoongAng Daily at her studio in Suwon, Gyeonggi.

Q. How did you start your career?

A. For AfreecaTV, I started because my friend said that me talking to myself while playing computer games was pretty funny.

Then I expanded my platform to YouTube, which made things a lot easier for me because I could plan and shoot the videos in advance, while AfreecaTV was all about live broadcasting. I had to prepare everything for the two-to-three-hour show. If the comments I prepared were well-received by the audience, that day was a success. But if not, it was a failure.

For YouTube, however, I can cut out the unfunny parts whenever I want after I shoot the video in advance.

I still do live broadcasting in AfreecaTV now, but the content is more coordinated toward editing for YouTube. Also, in terms of followers, I collected about 900,000 on AfreecaTV over the past eight years, but for YouTube we are almost reaching 1.3 million in just a couple of years.


Did you expect this much popularity when you first started?

Not at all. When I first started commentating on online games, there weren’t even that many women doing the job. So there were some misunderstandings about me, [with people] saying that I didn’t have any friends or was an outsider.

What was your strongest point as a female game vlogger?

In terms of playing games and the content, there is no difference at all. But I can say one thing that our channel is a little more sentimental than others. We can express happiness, sadness and craziness and it wouldn’t feel awkward at all.

Although a YouTube star is often referred to as an “individual broadcaster,” your channel features a lot of other members known as the “Yangdding Crew.” How did you guys come together?

It was all natural. At first, I asked my viewers for help when I needed help editing videos or drawing graphics. I paid them back by buying dinner back then. However, with the business getting bigger and forming a firm profit structure, I wanted to work with them. Every single person on the staff used to be viewers.

You started as a game vlogger, but now you run so many channels on diverse themes. How do you come up with the ideas?

I use my life patterns the most. I believe that there must be people out there who are curious about the same things that I’m curious about. For example, if there is a new menu item launching, I have to taste it myself no matter what others say, which is why I started running the “Daemeoknyeo” [one of her regular series where she tries a new menu and critiques it].

How long does it take for your idea to become a reality?

What’s your next idea?

There are so many ideas that I can’t pick one [laughs]. Well, I have always liked traveling. Not the type where you have to visit every tourist site, but something that is more spontaneous, where you go out on the street with only a nice restaurant in mind and go as your heart leads you.

I want to reflect all those processes in my camera and tell people that there is this kind of a way to travel as well.

What’s the best part of being an individual content creator?

I think the most interesting part about my job is the fact that everything can be a theme for my show’s content as long as there is a camera. When I’m with my friend and he or she brings something interesting, I borrow it right away and film it.

Why do you think people like your videos so much despite the fact that nothing extraordinary appears in them?

I insist on filming things that are very common but which nobody would bother to film. If you want to do something that is too creative, it won’t be able to win the viewers’ hearts. I try to walk the fine line between the concept of being ordinary and extraordinary.

When do you feel most worthwhile as a content creator?

When somebody comments on my video saying that he or she has followed what I did before such as eating a certain product or going to certain restaurant. When they say “Yandding is believable,” I truly get the feeling that we are interacting.

You are definitely a market leader as an individual creator on YouTube. But there are many followers who are increasingly becoming popular. How do you feel about that?

I don’t care about them that much. When I was doing the live show in AfreecaTV, I needed to have that power to suck in the audience and make them stay tuned.

But the key point of being successful on YouTube is the capacity to produce, and we are not lagging behind in that at all because we have the crew.

Right now the YouTube platform has to get bigger in order to attract more of an audience. A bigger market would lure in more visitors, and if Yangdding can shine among the other producers, I think we will be OK.

What is your biggest challenge these days?

The expectation people have on me is the most stressful thing. People sometimes say I have to be perfect and that the quality of my videos should be good just because I am Yangdding, but it can get burdensome sometimes.

What would you recommend to young people aspiring to be the next YouTube star?

I think they have to keep trying no matter what the result is. If they keep uploading their videos they will see the particular clips that get good reviews. From then on, they have to choose and focus on the selected themes.

However, I see a lot of young people these days who are let down at the fact that the first few of their videos weren’t successful.

I also want to say that when you are a budding YouTuber, you can fail as much as you want because you don’t have anything to risk.

However, once you start to gain popularity, the freedom to make videos will become highly restricted due to the expectations of viewers.