Mercedes-Benz’s Certified Pre-Owned cars are displayed for sale at its StarClass dealership in Yongin, southern Gyeonggi, on Monday.

Sales of imported cars have been consistently increasing in recent years. Foreign brands’ market share in April was 13.6 percent, up from 12.3 percent a year ago and 10 percent in 2013, according to data provided by Korea Automobile Manufacturers Association (KAMA).

But one Achilles’ heel for the foreign automakers is the secondary market. Foreign cars depreciate faster than Korean cars, and that affects people’s decision over which car to buy.

This is particularly true for mid- to large-sized sedans including the BMW 520d, Mercedes-Benz E300 and Audi A6. Once they are no longer new, their prices drop much faster than for Korean cars such as the Hyundai Genesis due to some expenses that used car buyers incur, including repair and insurance fees.

Foreign brands want to reduce the gap to remove any impediment to buying an import. One solution is to operate their own used car businesses.

Mercedes-Benz Korea is the company that cares about the issue most. This year, the company was the No. 1 brand in the used car market among foreign brands with 15,197 units sold. Mercedes currently operates a StarClass program, which gives a title of Certified Pre-Owned (CPO) to Benz cars that pass the company’s inspection. On Monday, Mercedes showed the media how the CPO process goes.

“Once a car comes in for CPO inspection, we first wash the vehicle and then start examining it,” said An Jong-bu, an executive of Hansung Motor, the Benz importer. “We basically check everything, like whether the engine oil leaks and whether every system is operating normally. If the car fails any of the 178 tests, the CPO title can’t be given. It generally takes more than four hours to run the inspection.”

Cars that passed the inspection are sent for exterior work including painting. Once the car completes a test drive, the CPO title is given and it can be put up for sale at a Benz dealership. 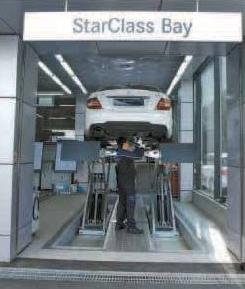 A mechanic at Mercedes-Benz Korea inspects a car to decide whether the vehicle can be sold as a Certified Pre-Owned car at a the StarClass dealership in Yongin. Provided by the company

It currently operates three StarClass shops, two in Seoul and one in Yongin, southern Gyeonggi, and has plans to open four more in the second half of this year: in Masan, South Gyeongsang; Jukjeon, Gyeonggi; Pohang, North Gyeongsang; and Busan.

“More than 60 percent of these used cars are as good as a new since they are only six to eight months old,” said Choi Duk-jun, vice president of sales at Mercedes-Benz Korea. “StarClass helps us to maintain our premium brand image in the used car market as the overall quality of CPOs is better than normal used cars.” The average price for StarClass cars is about 15 percent more than normal used cars, and they include a one-year or 20,000-kilometer (12,400-mile) warranty.

Rival BMW Korea has been running a used car business for 10 years in 12 locations and it plans to open two more BMW Premium Selection (BPS) shops. The BPS title is given to BMW and MINI vehicles that have no accident records for five years or less than 100,000 kilometers of mileage after they pass the company’s 72 inspection categories. BMW Korea offers a one-year or 20,000-kilometer warranty and such services as a 24-hour emergency rescue service.

Audi-Volkswagen Korea, Volvo Car Korea and Toyota Korea are considering launching such businesses this year. Toyota Korea will put its premium brand Lexus at the center, and Volvo Car Korea have sent their staff overseas to bring the mother company’s business model to the country.

Last August, Jaguar Land Rover Korea opened a used car shop in Korea, which was the first in the Asia-Pacific region, and supercars such as Porsche and Ferrari are also running used car businesses. 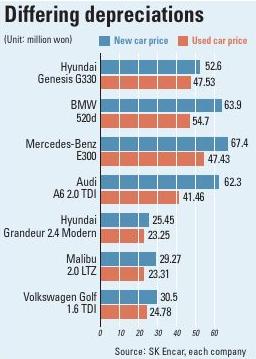