Singapore, North Korea have reasons to be tight

Singapore, North Korea have reasons to be tight 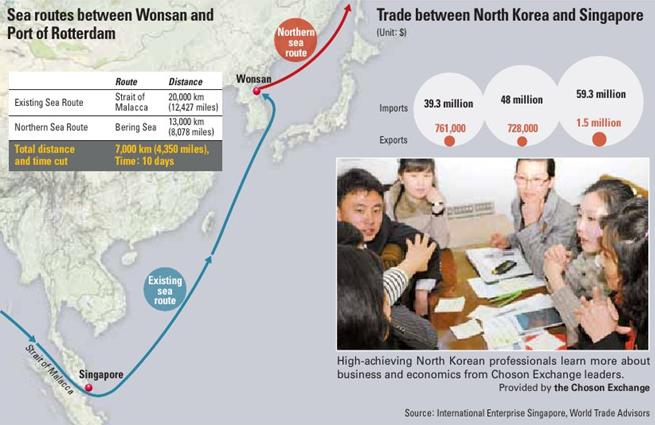 When North Korea established its Rajin-Sonbong Special Economic Zone (Rason SEZ) in December 1991, the model for it was taken from Singapore.

Leading these efforts was a Korean-Australian surnamed Lee, 78, who at the time said, “With little overseas experience and no knowledge of Special Economic Zones, North Korea is approaching the development of the Rason SEZ as if it were a construction project, and it is unlikely that this project will work out.”

Upon opening, the Rason SEZ was unsuccessful in attracting foreign capital, the most essential factor for an SEZ’s progress, and only a few businesses affiliated with the pro-Pyongyang General Association of Korean Residents in Japan found their way to the Rason SEZ.

But despite its failure, North Korea remains scrupulously attached to Singapore as its model for economic progress. Experts suggest that the reason for this attachment is Singapore’s ability to develop economically while maintaining an authoritarian regime and repressing political development.

Yet what North Korea could not replicate from pictures alone was the reason for Singapore’s success: its ability to attract foreign capital. While Singapore drastically eliminated tariffs and corporate taxes for Western companies to do business freely, North Korea’s corporate tax within the Rason SEZ still remains at 14 percent.

Though North Korea seeks to mimic Singapore’s success, it has failed to adopt the more important economic policies of the Southeast Asian nation.

It cannot compete with Singapore’s ability to attract foreign capital through complete corporate tax exemptions for foreign companies. Pyongyang is oblivious to this. Cho Bong-hyun, a research fellow at the Seoul-based IBK Economic Research Institute, said, “When the Choson Exchange visited Pyongyang, Choe Thae-bok, a member of the Secretariat of the Workers’ Party of Korea, said he wanted to ‘learn the Singaporean model,’?” which was an example of the extent to which North Korea is interested in following Singapore’s economic programs.

The motivation behind North Korea’s attachment to Singapore is clear, but what is the basis for Singapore’s interest in North Korea?

The reason seems to be the development of the Northern Sea Route, which connects the Atlantic and Pacific Oceans. Currently 40 percent of worldwide maritime trade travels through the Strait of Malacca, the main shipping channel between the Indian and Pacific Oceans running along almost half the perimeter of Singapore. If the ships that normally travel through this strait decide to pass through the Northern Sea Route instead, revenues can only sharply decline.

This is why Singapore is invested in North Korea. If the Wonsan Special Economic Zone takes off, Singapore can collect transit fees and have some financial insurance in the advent of the expansion of the Northern Sea Route.

“The chance that children born today will, 20 years from now, be unemployed is high,” a Singaporean government official said. “Who knows what will happen now with the Wonsan Special Economic Zone, but we’re preparing for 20 years from now.”

Kim Jong-un, the first chairman of the National Defense Commission of North Korea, stressed in his New Year’s message, “Relationships with foreign economies will be multilaterally advanced and the Wonsan and Mount Kumgang international tourism zones that include special economic zones and development projects will be actively promoted.”

Since establishing diplomatic relations in 1975, the two countries currently enjoy a close relationship.