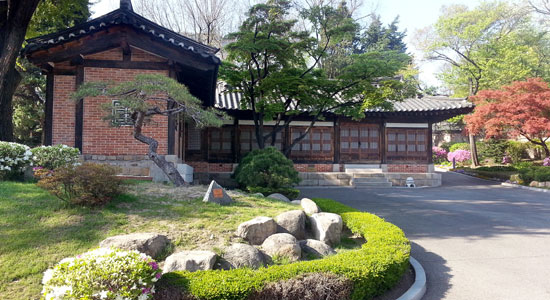 During the Culture Night festival, the old residence of the U.S. ambassador and its garden will be open to the public. Provided by the Jung District Office

The old residence of the U.S. Ambassador to Korea will open up to the public for the first time at the end of the month as part of a nighttime festival in the capital city.

The building in Jung District, central Seoul, is named after Philip Habib, who served as the U.S. ambassador to Korea in the 1970s. It is known as the Habib House.

It is the oldest U.S. government residence outside of the United States, having been provided to the nation by Korea’s Joseon Dynasty (1392-1910) in 1884.

The inside of the moss- and vine-covered residence has rarely been seen.

Including the Habib House, 20 cultural facilities in central Seoul, such as Deoksu Palace and the Seoul Cathedral Anglican Church of Korea, will be open to the public from May 29 to 30 until 10 p.m. for the Culture Night festival, organized by the Jung District Office.

The overarching theme of the whole festival is to introduce the history of the area.

Many marketplaces and government offices were located in Jung District during the Joseon era. It also has existing cultural heritage facilities that were established in Korea’s early 19th-century modern era.

For the event, the district office used Copenhagen’s annual Culture Night, a significant tourist attraction for more than two decades, as a benchmark. The office’s head, Choi Chang-sik, said the district will help non-Koreans enjoy the festival by using English, Chinese and Japanese speakers as staff.

District offices are organizing many other events throughout Seoul.

For instance, the Sinchon Water Gun Festival, established in 2013 and sponsored by Seodaemun District, has drawn huge popularity. It had 25,000 participants last year.

The scale of this year’s festival will be much bigger, according to the Seodaemun office.

On May 23, the 19th Seoul International Cartoon and Animation Festival (Sicaf) is expected to garner much attention. The largest comic festival in the country will kick off at Seoul Square with a screening of “The Case of Hana and Alice” (2015), directed by Shunji Iwai, the Japanese filmmaker behind “Love Letter” (1995).