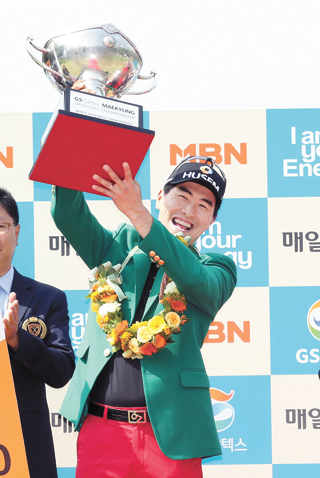 Will Moon Kyong-jun be another late bloomer in Korean men’s golf?

After 10 years and 86 events, the 32-year-old Moon finally took his first title on Sunday by winning the GS Caltex Maekyung Open, which is co-sanctioned by the Korean Tour and OneAsia Tour, at Namseoul Country Club in Seongnam, Gyeonggi.

Despite a triple bogey on the final hole, he finished at 4-under 288, two strokes ahead of Kim Do-hoon, Ryan Fox, Jason Norris and Gareth Paddison.

His victory was enough to deflect attention from 60-year-old Choi Sang-ho, who became the oldest golfer to qualify for the Korean Tour, breaking the previous record set by Choi Youn-soo at age 58. Choi Sang-ho tied for 26th.

Before touching a golf club, Moon swung tennis rackets through high school. He started learning golf during his sophomore year at Kyonggi University.

“Thinking of switching to golf, I actually went a couple of times to the practice center with my father during high school,” he said. “The problem was that you need to take intensive training, but it was too costly for me.”

After four years of learning golf, Moon became a member of the Korea Professional Golfers Association in 2006 and started playing on the Korean Tour the following year.

But after 2008, when he finished 26th in prize money, Moon suffered a panic disorder and couldn’t even ride in elevators. The 182-centimeter (6-foot) golfer said he didn’t take medication because he didn’t want to be dependent on drugs the rest of his life.

Instead, he went into the military. Moon said he started meditating and hiking during that time and in November 2011 he met his wife.

“In the past, when I played in the final group I was nervous and felt so much pressure I couldn’t even breathe,” said Moon, who earned 200 million won ($184,253) for winning the event. “Now I always use autosuggestion, saying to myself, ‘I can do it, I can make it.’?”

For golf fans, Moon’s success is reminiscent of veteran Korean golfers K.J. Choi and Yang Yong-eun. Choi, an eight-time PGA Tour winner, and Yang, winner of the 2009 PGA Championship, started playing golf after being weight lifters and bodybuilders. Despite coming to the sport late, both are ranked among Korea’s best golfer players ever.

Moon regards Choi as his mentor. The golfer, who is sponsored by Husem, said he remembered Choi’s advice of, “Don’t follow the trophy, just stay calm so that victory can come to you,” in the tournament.

Moon said he started golfing because he wanted to someday teach the sport in college, but now his goals are different.

“I still have a plan to write a thesis on how a player who isn’t perfect, like me, also can beat elite golfers,” he said.

“Winning is good, but I want to keep playing even after the age of 50 for the senior tours.”