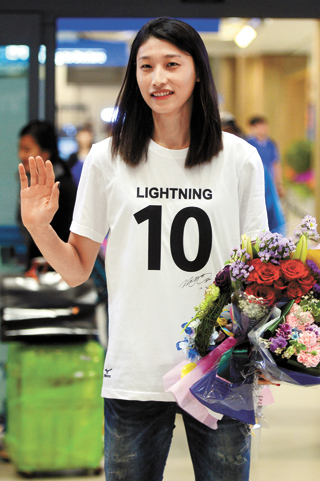 Turkey is Kim Yeon-koung’s second home. Since joining Fenerbahce in the Turkish Women’s Volleyball League in 2011, the 27-year-old has become one of the top volleyball stars in the world.

The 192-centimeter (6-foot-3) spiker was the 2011-12 MVP in the Women’s CEV Champions League, the European club competition, after leading Fenerbahce to the title.

She also was MVP and Fenerbahce was the winner of the 2013-14 Women’s CEV Cup. In the 2014-15 season, Fenerbahce won the league championship and Kim was the MVP.

Kim, who formerly played for the Heungkuk Life Pink Spiders and the JT Marvelous in Japan, came to Korea on May 8 to train with the Korean national team for the Asian Women’s Volleyball Championship in Tianjin, China, that begins Wednesday and continues through May 28. Korea is in the same group as Kazakhstan, Australia and the Philippines.

Excluding Japan, the top three teams will compete in World Olympic Qualification Tournament in May 2016 to play in the Rio de Janeiro Summer Games.

Kim, who has played with the national team since 2005, says coming to Korea seems awkward after spending so long living in Turkey.

Kim sat down last Wednesday with the JoongAng Ilbo at the Jincheon National Training Center in North Chungcheong.

Q. How do you feel about joining the national team after the league season in Turkey?

A. I feel a little tired because the season began last October. And I’m still jet-lagged. But when I arrived in Korea, I changed my hairstyle first, having a little cut and dying it brown. So I’m starting to feel more refreshed.

Since last year, you have been team captain. How do you get along with the young players?

At first I tried to get closer with the young players, but I think they are still intimidated by me. In particular, [Lee] Jae-young even shivers when she sits next me. I met her last year and we have had about 10 conversations, all of which I started. I knew she thought of me as a role model, which is very gratifying, but I hope we can get along comfortably like others are doing.

National team coach Lee Jung-chul says winning a medal in the Olympics depends on how you teach young players. Do you agree?

There are lots of things to do when you join the national team. When I was the national team’s youngest, I didn’t know that. Coach told me, “Don’t just encourage young players, sometimes tell them what they need to improve.” Now, I always emphasize staying focused and sticking to the basics.

Coach Lee is known for rigorous and tough training. What do you think?

You know, I don’t like the coach that much (laughs). I first met him when I was playing on the junior national team, and I was scolded a lot and trained hard. In Europe, we train about two-and-a-half hours a day, but Lee trains a hour more than that with a tight schedule. So as soon as I saw him, I said, “I hate you.”

In the 2012 London Olympics, the national team failed to win the bronze medal. Does that still bother you?

After the Olympics, I didn’t sleep much for two years, there was so much regret. With that experience in mind, I really want to play better next year. So far, I haven’t earned an Olympic medal. Regardless of the medal color, I want to win it. If young players progress well, we can win the medal.

You have been living in Turkey for four years. How’s it going?

Now it feels awkward to come to Korea, while Turkey feels like my home. My Turkish has improved to where I can speak enough to get by. Since the coach and players speak English, my English also has improved a lot. Now, my life is in Turkey. Turkish people know that I’m Kim from Fenerbahce. They first treated me like a celebrity, but now I’m just one of the neighbors they greet.

Do you think you would marry a Turkish man?

In the past, I really didn’t consider Turkish men as husband material, but not anymore. I found there is a more attentive and relaxed side of Turkish men, and I think other foreign men are alright. But I don’t have a boyfriend right now. I’m living happily doing exercise these days.

We heard you cook well after living a long time abroad.

Well, now I’m getting tired of cooking (laughs). But when I really want to eat Korean food, I cook foods like bulgogi (barbecued beef), kimchi jjigae (kimchi stew) and spicy braised chicken. But as I spend more time in Turkey, I think my taste for Korean food is not like the old days. Although some players think Korean food isn’t delicious, for me it’s always delicious.

Maybe that is why some of my teammates don’t go to the restaurants I recommend (laughs).