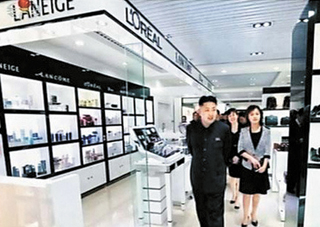 North Korean leader Kim Jung-un and his wife, Ri Sol-ju, tour a department store in Pyongyang. High-end luxury brand purchases by the country’s elite are one of the many changes that have happened in North Korea.[JoongAng Ilbo]

Last month Lee Byung-ho, director of South Korea’s National Intelligence Service, told South Korean lawmakers that among North Korea’s elite, Cuckoo rice cookers from South Korean are popular - but not the ones with voice prompts because the voice has a South Korean accent.

A North Korean expert told the JoongAng Ilbo that there was a business opportunity for rice cookers with North Korean accented prompts - because there are more North Koreans with disposable income than ever before.

The South Korean intelligence agency estimated that there are roughly 60,000 individuals in the North with wealth of more than $50,000 living fairly luxurious lives. When adding in an additional three family members, that figure rises to 240,000, which is 1 percent of North Korea’s entire population of 24 million.

Major changes began after North Korea suffered extreme famine in the mid 1990s and the distribution system controlled by the government collapsed. A somewhat free market arose to become the main center of survival. Earlier North Korea was still able to control its elite class through job allotment. But average people no longer relied on the state for everything. The government turned a blind eye to market activity but continued to maintain a red line on any activity that showed insubordination to the state. 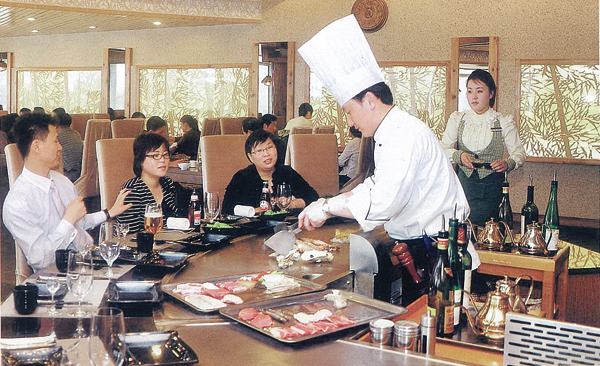 Consumer trends have been recently changing rapidly in North Korea, particularly among the relatively affluent who enjoy dining out or getting massages. [JoongAng Ilbo]

There are even estimates that roughly 100,000 North Koreans earn more than $40,000 a year. As their numbers grow, spending on high-end goods has surged. Leader Kim Jong-un and his wife Ri Sol-ju’s infatuation with luxury goods has contributed to the trend. Ri has been seen in North Korean media carrying a French luxury bag worth 1.8 million won ($1,658).

In North Korea, South Korean cosmetics goods are widely distributed under the radar through door-to-door sales. The development of mobile phone technology has also contributed to changes in consumption in North Korea. Earlier this year North Korea celebrated the milestone of 2.4 million mobile phones by opening up an online shopping mall, Okryu. The e-commerce website operated by the People’s Service General Bureau sells products ranging from food from restaurants to bags and cosmetics through its own Intranet. Payment is made using an electronic card. Sources who recently visited North Korea said they witnessed the use of electronic cards that looked like debit cards.