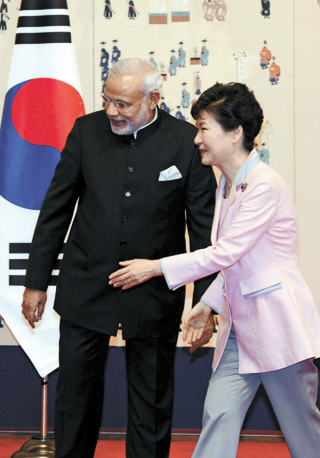 Following visits to China and Mongolia over the weekend, Indian Prime Minister Narendra Modi arrived in Korea on Monday to meet President Park Geun-hye at the Blue House and encourage Korean manufacturers to relocate production to India.

At the summit, the two leaders decided to strengthen the relationship between Korea and India by elevating the two countries’ relationship into a “special strategic partnership.”

“It is meaningful to make the two countries’ relationship a step closer to each other,” said President Park Geun-hye at the summit. “I hope to see the two countries’ cooperation strengthen not only in economic affairs, but also in politics and national security.”

The partnership will involve regular cooperation between diplomats, the national assembly of each country, top national security officials, as well as defense R&D officials.

The two leaders said they will order trade authorities on each side to open additional negotiation sessions by June 2016 to expand the existing Comprehensive Economic Partnership Agreement (CEPA) trade pact.

According to industry data, market share for the company in India was 16.3 percent, second to Maruti Suzuki (42.9 percent) as of March.

India is an important production base for Hyundai for the European market.

“We might consider building a new plant, but it won’t be decided that soon because the plants in India and other production lines for the European market currently have no problems meeting consumer demand,” Hwang Kwan-sik, spokesman for Hyundai Motor, told the Korea JoongAng Daily.

For Posco Chairman Kwon Oh-joon, the meeting with the prime minister is crucial.

The company has been trying to build a steel mill with a total annual output of 12 million tons in the state of Odisha since 2005. The company signed a memorandum of understanding with the state government that also gave Posco the right to mine 600 million tons of iron ore. But the project has been delayed by objections by locals.

After the forum, Modi will visit the shipyard of Hyundai Heavy Industries in Ulsan, South Gyeongsang, and will meet Chairman Choi Kil-seon and President Kwon Oh-gap.

When Modi met National Assembly speaker Chung Eui-hwa earlier this month, he reportedly told Chung that he expects Korea, one of the leading shipbuilding nations, to invest to India, a nation with a shoreline of about 2,500 kilometers (1,553.4 miles).

Modi’s government is trying its best to boost the country’s manufacturing sector with its “Make in India” campaign. India is famous for its export of services such as computer programming or call centers but it is weak as a manufacturer of goods.

India is Korea’s ninth-largest trade partner. Korea exported $318 billion worth of goods to India and imported $474 billion worth last year. Growth has been steady but slow, according to data compiled by Korea International Trade Association (KITA).

Korea and India’s CEPA went into effect in 2010 but the level of market opening was much less than in other FTAs. India only accounts for only 2.3 percent of Korea’s total exports, despite nearly five years of the CEPA being in effect.

Only a small number of products like Korean-made machinery parts, materials and chemicals are exported, while Korea imports raw materials like light petroleum (kerosene), aluminum and liquefied natural gas.

Analysts say Korea’s trade relationship with India only has room to grow thanks to Modi’s economic development strategies, which largely involve foreign investment.

“As long as the ‘Modi-nomics’ policies are well maintained and implemented until his term ends in 2019, the Indian market will grow into an attractive place to do business,” said Song Song-yi, a researcher at KITA’s Institute for International Trade.

India’s growth estimates for this year by the Asia Development, International Monetary Fund and World Bank are above 7.5 percent - higher than China’s 6.8 percent.