Pyongyang hopes for investment from South

Pyongyang hopes for investment from South 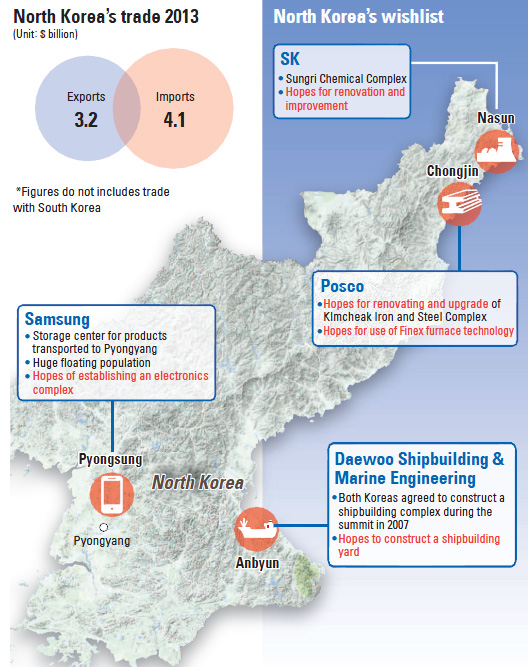 Several informants told the JoongAng Ilbo that North Korea is hoping that major South Korean conglomerates will set up manufacturing plants and other operations in North Korea.

“High-ranking North Korean government officials and businessmen said they are hoping that South Korean conglomerates would invest in North Korea’s regional and industrial complexes,” Han, a Korean-American who wished only to be identified by his family name, told the JoongAng Ilbo on Sunday after holding a meeting with a North Korean official at the Ministry of External Economic Affairs in Pyongyang last month.

A South Korean government official who participated in the summit between the two Koreas’ leaders in 2007 said North Korea has handpicked South Korean companies they believe are necessary partners for development.

Pyongsung is a center for storing supplies transported to Pyongyang. Additionally, it has a large floating population.

North Korea wants SK to invest in Nasun, a special economic zone in the northeast of the country. The Sungri Chemical Complex, which started production as a crude refinery in 1973, is in dire need of an upgrade as most of the facilities are outdated.

North Korea is also hoping South Korean steelmaker Posco will take an interest in remodeling its Kimchaek Iron and Steel Complex in Chongjin, south of Nasun. The steel plant was built during the Japanese colonial period. After the Soviet Union disintegrated, major support such as technology and facility upgrades shrank significantly. As a result the steel plants are extremely outdated. They produce 2.4 million tons of steel annually, which accounts for 40 percent of the country’s overall steel production.

North Korea wants to expand production to 10 million tons a year. Additionally, it is said to have a keen interest in the Finex furnace technology developed by Posco. Instead of using bituminous coal, that technology uses anthracite coal, which is 20 percent cheaper. North Korea doesn’t have bituminous coal, which it has to import from China. But according to Information System for Resources on North Korea, roughly 4 billion tons of anthracite coal is in North Korea.

During the 2007 summit, the two leaders expressed interest in constructing a joint shipbuilding complex in Gangwon, South Korea, that would involve Daewoo Shipbuilding and Marine Engineering.

But experts say for South Korean conglomerates to advance into North Korea or even to invest, the first thing that needs to be established is political stability in Pyongyang.

“If North Korea wants South Korean conglomerates to participate, it needs to first propose a business model and they cannot behave as they do in Kaesong, such as demanding raises for its workers unilaterally,” said Eom Chi-sung, head of the international department at South Korea’s largest business lobbying group, the Federation of Korean Industries.

South Korean business groups are urging the government to push forward economic cooperation with North Korea as they are feeling some competitive heat, including from China and Japan, which have shown interest in advancing into North Korea’s market.

“It would be too late if South Korean companies advance into North Korea after the relationship between the two Koreas improves,” said Lim Eul-chul, professor at Kyungnam University. “We have to keep in mind the fierce competition with China, Japan and Russia.”