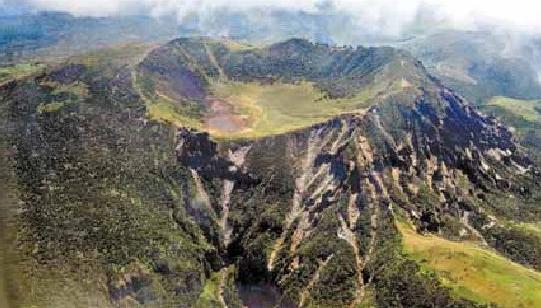 Mt. Halla, a dormant volcano, is South Korea’s highest peak at 1,950 meters. It is a Korean natural monument and was designated a Unesco Biosphere Reserve in 2002 and a Unesco World Natural Heritage site in 2007. [JoongAng Ilbo]

[Jeju Island is famous not only for Unesco’s designations as a natural preserve, a natural heritage and a geological park, but also as an arena of international conferences and meetings. Dr. Chin Haeng-nam explains the origins of Jeju as the Island of World Peace and the Jeju Forum, its achievements and tasks. Editor.]

In February 1988, South Korea’s President Roh Tae-woo announced in his inaugural address a foreign policy doctrine of “nordpolitik” as Korea responded to the close of the Cold War era. It aimed to normalize diplomatic relations with Communist states ? the Soviet Union, China, and the Eastern European bloc ? and thereby isolate Communist North Korea.

In September 1990, South Korea and the Soviet Union established diplomatic ties. This was a tremendous shock to the North, a traditional ally of the Soviets. The Soviet president, Mikhail Gorbachev, was conscious of North Korea’s reaction and the South Korea-Soviet summit in April 1991 was held in Jejurather than in Seoul.

The meeting of Roh and Gorbachev was a milestone in the ending of the Cold War, and Jeju islanders launched a campaign to have the island designated an “island of peace” for global peace and common prosperity.

The Korean government eventually declared Jeju an “Island of World Peace” on Jan. 27, 2005. The declaration wasn’t based solely on Jeju developing as a mecca for summit diplomacy and tourism, frequented by world leaders. The government also considered Jeju islanders’ will for reconciliation and human rights in light of the “April 3rd Uprising,” a tragedy in the period of 1947-54 in which tens of thousands of civilians died amid the ideological confusion of the post-liberation era.

The “Island of World Peace” designation is also based on Jeju islanders’ folk traditions of self-reliance and pride, symbolized by the “three absences”- no beggars, no thieves, and no gates. The “three absences” embody cultural traditions for an upright, self-sufficient and peaceful community life, in spite of the adverse conditions of rocky unproductive soils and rough seas.

Apart from Jeju, there are some well-known peace cities in the world: Hiroshima, Japan, hit by nuclear weapons, embraces the ideals of antiwar peace and denuclearization, while Osnabruck, Germany, in consideration of the Treaty of Westphalia and the Holocaust memorial, propagates a culture of fraternity and tolerance. The two were declared peace cities by their local councils. In contrast, Jeju was designated and signed into law as an “Island of World Peace” by the central government.

This is all happening within the context of territorial and historical conflicts across the East Asian region that have heightened tensions. Song Min-soon, a former Korean foreign minister, recently urged the heads of the Korean, U.S., Chinese, and Japanese delegations to have four-party talks on Jeju, the “Island of World Peace,” to increase cooperation and harmony across the western Pacific.

The “Island of World Peace,” which has pursued East Asian peace through the Korea-China-Japan summit in 2009 and the Korea-ASEAN special summit in 2010, continues to spread the spirit of peace.