Biyang Island, visible from Hyeopjae Beach in Jeju City, is home to over 80 fish species and many marine plants. Two craters form a basin in the middle of the volcanic “island that flew down from the sky,” a popular fishing and hiking destination. Dol hareubang, “old grandfather” stone statues (at right), are a symbol of Jeju, said to protect people from demons and increase fertility. Provided by World Heritage Institute

Q. With prominent former world leaders lined up to participate, is there high anticipation for this year’s Jeju Forum?

A. Celebrating the 10th event, we have invited many famous world leaders who have been recognized for their contribution to peace and prosperity. We are confident in the quality of the content as well as the lineup of guest speakers who will give insightful and inspirational thoughts to the forum.

How will this be the biggest forum to date? 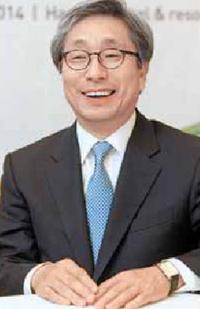 We have been organizing a variety of sessions, and on the opening day, Korea’s Ministry of Foreign Affairs is hosting the 13th East Asia Forum with the theme, “Prosperous East Asia through Non-Traditional Security Cooperation.”

That forum is a comprehensive annual gathering of officials from the Asean nations and Korea, China and Japan. It functions as a global research body that studies community-building in East Asia. Hosting the EAF as a special session in the Jeju Forum is a milestone in our forum’s history.

Despite the well-known political names coming here, all have the prefix “former.” How far away are we from seeing current heads of states at the Jeju Forum?

The Jeju Forum is Korea’s only government-funded, public forum for peace and prosperity and has more than 30 governmental and corporate sponsors, among them the Ministry of Foreign Affairs and the Jeju Special Self-Governing Province. If Jeju becomes more popular throughout the world and our president regularly attends the Jeju Forum, we may see many incumbent heads of state at the forum soon.

How would you measure the success of the forum?

It is hard to measure the degree of success of a forum, but usually it is about the level and numbers of speakers and participants and media coverage. However, our focus is to find answers. We consider all the issues in the East Asian region as our homework and hence we work hard to provide an arena to discuss those issues and at the same time, to solve those problems, even though it is hard to find satisfactory solutions to all these difficult issues.

Does the forum want to emulate the World Economic Forum in Davos, or do you think it is now forging its own path?

We are definitely following our own path. There is still a long way to go to be like the Davos Forum, but we are learning a lot from it.

This is the Forum’s 10th event and 15th year. What benefits do you think it has brought Jeju Island?

Not to mention the modest financial revenue it brings in annually, the Jeju Forum has contributed to make Jeju famous in Korea and Asia as well. It also promotes in-depth understanding of the island and its future.

We have stressed the Jeju Forum and how it was started. We’ve made a tremendous effort to commemorate that spirit each year, but most of all, the Jeju Forum provides ample demonstration of what a public forum can achieve when it sets out to promote greater cooperation and mutually beneficial outcome for the region. Many local issues are also discussed in the forum. Issues such as Chinese investment in Jeju, water-related industrial convergence and cultural initiatives have been intensively dealt with in the forum.

The forum started as the Jeju Peace Forum and then the focus shifted to economic growth and prosperity. Is the forum now returning to its roots?

The main focus of the Jeju Forum has invariably been on “peace” and “community-building in East Asia.” Peace and prosperity have been reckoned as the two main pillars for peace-keeping and co-prosperity; hence, the Jeju Peace Forum renamed itself the “Jeju Forum for Peace and Prosperity” in 2011. This effort is to reinvigorate active discussion in the forum, not to shift its focus just to the economy or finance.

Why the focus on trust-building?

With elevated tensions in East Asia, we believe nations in the region should focus on earning trust from each other to form a harmonious community. And the theme also reflects the essential features of South Korea’s diplomatic policies, including the Northeast Asia Peace and Cooperation Initiative, Trust Process on the Korean Peninsula, and Eurasia Initiative.

Previous forum themes expounded confidence in the Asian century -- designing, new Asia, new trends, new waves. This year’s theme seems much more reflective, perhaps unsure. Is this a recognition that Asia needs to revisit its past and seek meaningful reconciliation?

Not necessarily, but it has been taken into account that the historical meaning of the 70th anniversary of the end of the World War II, establishment of the United Nations, and the 50th anniversary of the normalization of diplomatic ties between Korea and Japan should not be irrelevant to this year’s theme.

Why is it time to put the spotlight on inter-Korean relations?

Our government established the Presidential Panel for Unification to prepare for unification last year.

With the emphasis on the 70th anniversary of Korea’s liberation from Japanese colonial rule, we believe this is the right time to talk about reunification in depth.

Have any North Koreans been invited to take part?