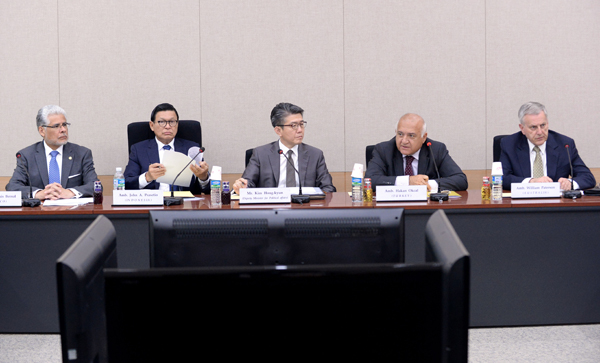 The top envoys from the five middle-power countries of Mexico, Indonesia, Korea, Turkey and Australia gathered to discuss the need to solidify the group’s identity as it tackles global and regional issues ahead of the fifth meeting of its foreign ministers on Friday in Seoul.

Mikta, the acronym for the association, officially launched in September 2013 as an informal platform for cooperation and consultation among the five countries represented at the meeting.

“We are all democracies, committed to free markets, sharing commitment to human rights and rules based order,” Ambassador Paterson said.

He added that the group, as “responsible and responsive players in the international system, are looking at ways where our collective way can make a difference … [and] have influence there that we may not have.”

“When it came to the proposal by China to establish the AIIB, both of us were very interested in the potential… but we wanted we wanted to ensure that its transparency, its accountability and its governance standards were equivalent to those of existing institutes such as the World Bank, the IMF and the Asian Development Bank. It was this commonality of shared interest that led us to engage in a very detailed and very regular process of consultations before both of countries decided to sign on to the memorandum of understanding as a first step to joining the bank.”

The AIIB is seen as a potential rival to the World Bank or the Asian Development Bank (ADB), which are led by Japan with U.S. support.

Indonesian Ambassador Prasetio added that the consultative group is free to make its own decisions on sensitive issues. However, member countries may also check with fellow Mikta participants on where they stand. He especially emphasized the importance of “informal consultation.”

This marks the first Mikta foreign ministerial meeting to be held in Korea, the current chair of the group, since it launched.

“Our hope is that this foreign ministers’ meeting will take Mikta to the next level, in terms of both greater solidarity as well as deeper cooperation,” Kim said.

He added that the foreign ministers’ meeting is expected to announce a vision statement that sets out its identity and future direction.

Mexico hosted the first foreign ministers meeting in 2014, Ambassador Bernal pointed out, and these meetings provide opportunities for ministers to “informally speak more openly” and for other officials of member countries to cooperate even across regions and different organizations like the United Nations.

“We need to identify some priorities on which we should focus,” Turkish Ambassador Okcal said of the tasks at hand. “There’s the issue of organizational aspects, frequency of meetings, and levels of meetings. The ministers are meeting three times a year, but we need to reach out to a wider audience, a global audience. I don’t think the public knows, in general, about Mikta yet.”