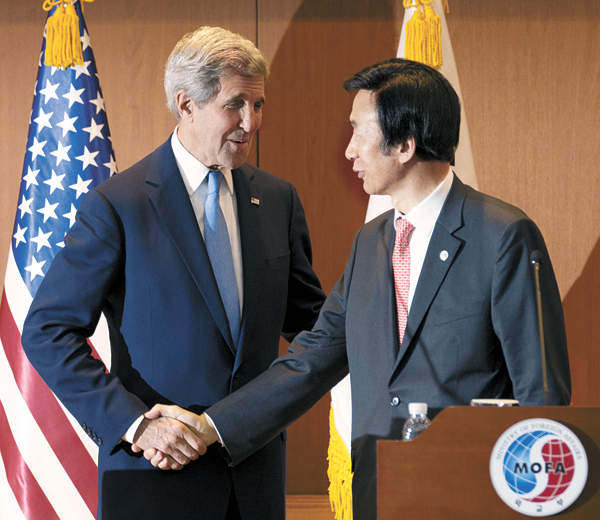 U.S. Secretary of State John Kerry said during his visit to Seoul that North Korean leader Kim Jong-un is well on his way to being referred to the International Criminal Court (ICC) considering his uncooperative behavior and that Washington is mulling stronger punitive measures, including sanctions, against Pyongyang.

Kerry said in a joint press conference with South Korean Foreign Minister Yun Byung-se on Monday that Washington will offer Pyongyang an improved bilateral relationship “if and only if and when it demonstrates a genuine willingness to fulfill denuclearization obligations and commitments” and address other pressing concerns shared by the international community, such as its human rights record.

However, Kerry added that the regime “has not even come close to meeting those standards.”

“For the first time the UN Security Council last year took up the question of a referral of North Korea, and particularly Kim Jong-un’s behavior, to the International Criminal Court,” Kerry said. “If their horrific conduct continues, it is hard to see how that referral to the criminal court will not take place.”

Kerry’s visit to Seoul comes amid ongoing human rights issues and continued provocation from North Korea, including a test-firing earlier this month of a ballistic missile from a submarine.

The U.S. secretary of state arrived in Seoul on Sunday from Beijing for a two-day visit. Earlier Monday, Kerry held talks with President Park at the Blue House in Seoul to discuss joint countermeasures against North Korea and other bilateral issues, according to the presidential office.

At the press conference, he also emphasized that the alliance between South Korea and the United States is stronger than ever, underscoring that “there is no daylight, not an inch, not a centimeter, not a microscope of difference” between either country in their approach to North Korea’s saber-rattling or its nuclear program.

Pyongyang’s test-fire of its submarine-launched ballistic missile (SLBM) “is just one more example of that, provocative and contrary to the United Nations requirements and contrary to all international standards,” he said.

Other members of the long-stalled six party talks - a platform that includes China, Japan, Russia, the United States and the two Koreas, whose original aim was to convince Pyongyang to abandon its nuclear ambitions - have actively tried to “reach out and offer a different path,” Kerry pointed out, though those gestures have all been rejected.

“As a result of that, we are indeed talking about ways to increase pressure and increase the potential of either sanctions or other means of making it clear to him that he is on a very dangerous course in the missiles systems and continued pursuit of his nuclear weapons program,” he said.

Emphasizing the stark comparison between the direction in which Kim Jong-un is heading and the path Iran has chosen, he said Iran’s case could perhaps “serve as an example to North Korea about a better way to move, a better way to try to behave.”

In reference to the execution of Hyon Yong-chol, North Korea’s defense chief, he added, “The world is hearing increasingly more and more stories of grotesque, grisly, horrendous public displays of executions on a whim or fancy by the leader against people who were close to him.”

Kerry also stressed the need for trilateral defense cooperation between Seoul, Washington and Tokyo, as countries that share common values. Addressing concerns about the new defense guidelines between Tokyo and Washington, the U.S. secretary said that the pact had come about after close consultation with Seoul along the way. “What Korea doesn’t consent to would be absolutely against the law and would not be initiated in the first place,” he said.

Regarding tensions between Korea and Japan over historical issues, Kerry said, “With respect to the powerful and important part of reconciliation that comes from the events of World War II, particularly the trafficking of women for sexual purposes by the Japanese military during that war, we have said many times that it was a terrible, egregious violation of human rights.”

“The United States has continually encouraged Japan to approach this and other issues arising from the past in a matter that is conducive to stronger relations with its neighbors.”

He urged both Seoul and Tokyo to “continue to engage in a direct dialogue to a mutually accepted resolution that promotes healing while facilitating a future-oriented relationship.”

Seoul and Washington’s “security alliance and overall relationship,” he added, “is absolutely stronger,” partly because of three agreements reached in the past year: the agreement on the transfer of operational control to Korea; the renewed Special Measures Agreement, which establishes a new framework for Korea to offset costs associated with stationing the United States Forces Korea in the country; and, most recently, the new civil nuclear cooperation pact.