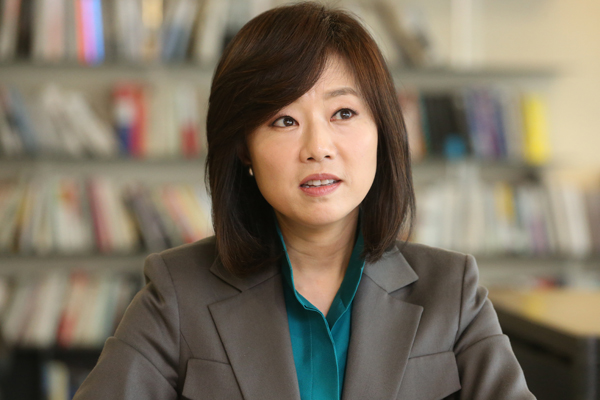 Presidential Secretary for Political Affairs Cho Yoon-sun resigned from her post Monday to take responsibility for a parliamentary delay in passing a long-waited reform plan to rein in the debt-stricken pension program for civil servants.

Cho was appointed as the presidential secretary for political affairs last June - the first female to hold the position - but resigned 11 months later after the ruling and opposition parties failed to approve a bill for the pension system’s overhaul.

The partisan clash on the issue centers on whether to link the national pension plan with a measure to reform the pension program for civil servants.

The main opposition New Politics Alliance for Democracy (NPAD) has called for the income replacement ratio for the national pension - the percentage of working income an individual requires to maintain the same standard of living in retirement - be raised to 50 percent from the current 40 percent, a demand the ruling Saenuri opposes, which resulted in a failure on May 6 to approve the reform plan. The leadership of the two initially agreed to raise the ratio by 10 percent, but the ruling party backtracked after the Blue House expressed its strong opposition to linking the national pension plan with the pension for civil servants.

In a statement on her resignation released Monday, Cho said she felt grave responsibility for the situation as a presidential aide.

“Though I resign now from my post, I sincerely ask those involved in the talks to produce an outcome that will serve the nation and its people, and one that can be viewed with admiration in the future,” she said.

Cho added that passing the reform plan was of utmost importance in order to avoid passing on massive debt to the next generation and cut down on spending needed to keep the pension plan afloat.

The government has said the pension plan needs 10 billion won ($9.2 million) daily to keep it running as it is.

Cho, who served in the National Assembly from 2008 to 2012, said Korea could potentially follow in Greece’s footsteps if it did not swiftly and adeptly address the matter.

Cho, who graduated from Seoul National University with a degree in international relations, is a lawyer turned politician who has often been touted as an exemplary figure for working women.

Park’s acceptance of Cho’s resignation was interpreted as the president’s willingness to push through a reform plan in a timely manner.

This year is seen by many analysts as the last opportune time for her government to accomplish key policy objectives, particularly with no major elections scheduled in 2015.