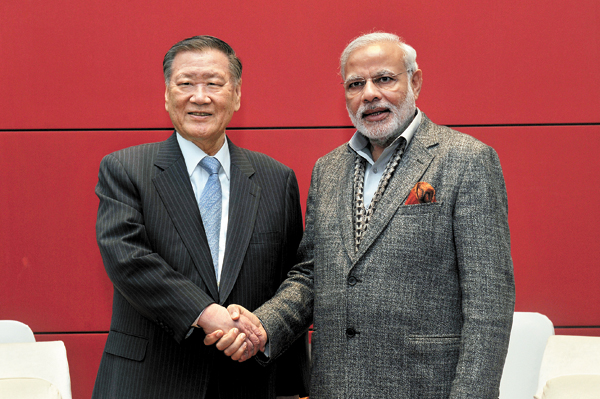 Hyundai Motor Group Chairman Chung Mong-koo shakes hands with Indian Prime Minister Narendra Modi in a meeting in Seoul on Tuesday. Modi, who has been trying to attract foreign investments to boost India’s manufacturing sector, asked the Hyundai Motor Group chief to make more investments in cars and other basic industries including railways and construction. Provided by the company

It was only a two-day visit to Korea for Prime Minister Narendra Modi, but it was a big business opportunity for both India and Korea. CEOs and chairmen of the nation’s major conglomerates including Hyundai Motor Group, Samsung Electronics, Posco and Hyundai Heavy Industries came out to meet Modi, who has vowed business-friendly policies for foreign companies, a reflection of their interest in a market of 1.2 billion Indians.

According to the Korea Trade-Investment Promotion Agency (Kotra), a massive amount of investments have been flowing into India’s economic hubs including New Delhi, Mumbai and Chennai by foreign companies such as General Electric, Amazon, Honda and Suzuki. The amount of foreign direct investment is expected to increase 130 percent this year from last year’s 26 trillion won ($ 23.9 billion).

Some of the toughest competition is predicted to be in the car business and Hyundai Motor Group Chairman Chung Mong-koo, who rules the nation’s two auto giants, Hyundai Motor and Kia Motors, didn’t want to miss his chance. On Tuesday, Chung met the prime minister for about 15 minutes at the Hilton Hotel in central Seoul and discussed how they will cooperate with each other to boost India’s car industry.

After the meeting, when reporters asked Chung whether he will build a third Hyundai Motor plant in India - which is also an important production base for exports to Europe - he replied, “We’re considering it.”

Hyundai Motor said the meeting was meant to strengthen its relationship with India. The prime minister has been trying to build up India’s manufacturing industry, and car sales in India increased 3.2 percent last year from 2013. About 2.74 million cars are expected to be sold this year, a 7.8 percent rise from a year ago.

Excluding commercial vehicles, India is the world’s sixth-largest car market with annual sales of about 2.5 million cars. Hyundai Motor built its first Indian plant in 1998 when only about 350,000 cars were sold in the country yearly because it thought the market had huge potential. It built its second plant in 2007. The two plants have produced 6 million cars as of Saturday and plan to sell 465,000 cars in India this year, which will be a 13 percent rise from a year ago.

Chung also hopes that Hyundai Motor Group can have a role in India’s basic industries including construction and railway development.

Later in the afternoon, Kwon Oh-joon, CEO the nation’s No. 1 steelmaker, Posco, met Modi to discuss India’s western regions including the state of Maharashtra, where the company is operating a cold-rolled steel mill, which it built in January. Posco has been increasing investments in India as it considers the country its next-generation production base for car steel sheets.

“If the Indian government helps other companies expand their businesses in the western region, the condition of our Maharashtra plant will be improved,” Kwon said.

Modi got out of Seoul, too. In order to have a 30-minute tour of Hyundai Heavy Industries’ shipyard in Ulsan, South Gyeongsang, he took a four-hour round trip to Ulsan and learned about the plant’s technological know-how.

In a Korea-India CEO Forum that was held prior to the individual meetings, about 300 business leaders from the two countries and President Park Geun-hye encouraged more business between the two countries. “The two countries should provide a new growth engine,” Park said in a speech, “by sharing each other’s plans to innovate the manufacturing industry.”