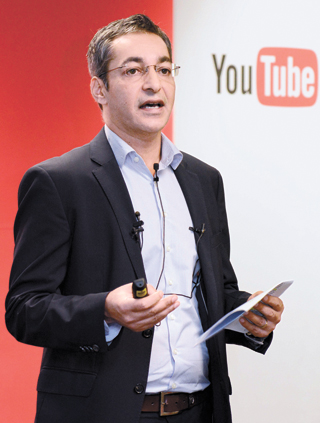 Gautam Anand, YouTube content and operations director, speaks during the company’s 10th anniversary ceremony on Tuesday at the Finance Center in Gangnam, southern Seoul. Provided by the company

YouTube has been a major contributor to the spread of Korean culture, and on Tuesday the world’s No. 1 online video platform celebrated its 10th anniversary at a ceremony in Seoul.

“Korea is a place with tremendous potential, where great opportunities exist for YouTube and our content creators here,” said Gautam Anand, YouTube’s content and operations director, who was at the ceremony.

Psy’s “Gangnam Style” is the most viewed video on the site, with more than 2.3 billion hits. A distant second is Justin Bieber’s “Baby,” with 1.1 billion.

According to Google Korea, the online video platform has 300 hours of videos uploaded each minute.

Korea has one of the largest shares of mobile viewers of any country in the world, at 70 percent.

In the first quarter of this year alone, YouTube viewing hours in Korea more than doubled compared to the same period a year ago,

Korea has the world’s second-highest smartphone penetration at 74 percent, behind Australia at 77 percent, according to Boston Consulting Group earlier this year.

YouTube says there has been a 90 percent increase in uploading of content in Korea during the first quarter of this year in comparison to January through March 2014.

Brian Suh, head of YouTube Partnership Korea, said five trends have shaped the platform’s service in Korea: the global popularity of Hallyu, or the Korean Wave; Koreans pioneering a new era of content creation; story-telling advertisements; fast-growing viewing time and uploads; and the highest percentage mobile viewership in the world.

The company said that among the top 20 YouTube channels in Korea, 25 percent were created by individuals and not corporate entities, including content-creating production companies. These channels are quickly gaining wide popularity as they saw a 70 percent increase in subscriptions, indicating that the video-streaming ecosystem here in Korea is also seeing a major paradigm shift.

Korean content creators, some with thousands of followers, were invited to the anniversary event. A few took to the stage to discuss the YouTube service in Korea, as well as to share their experiences as quasi-celebrities.

“Online YouTube stars are now also offline entrepreneurs who generate a tremendous amount of profit from advertisements,” said Suh. “They are not only creating their own fame, but also contributing to create a new business such as multi-channel networks (MCN) by changing the paradigm of their own fields.”