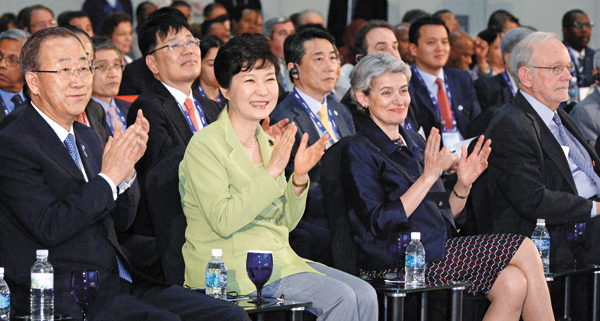 The 2015 World Education Forum kicked off on Tuesday in Songdo, Incheon, with up to 1,500 participants from United Nations agencies and civil society organizations and 195 Unesco member states taking part.

Organized by Unesco with six other United Nations agencies and hosted by Korea’s Ministry of Education, this year’s event will run through Friday at the Songdo Convensia in Incheon.

Among distinguished guests who attended the opening ceremony Tuesday were Irina Bokova, the director-general of Unesco, President Jim Yong Kim of the World Bank Group and UN Secretary-General Ban Ki-moon. President Park Geun-hye also attended the event to mark the ministry’s hosting of the four-day event.

In his opening remarks, Secretary-General Ban drew from his own experience as a child to stress the importance of education, reminding the audience at the conference hall that Korea used to be on the list of “least developed countries” just half a century ago.

“The Republic of Korea is the only nation in the world that moved from the list of least developed countries to the OECD, the Organization for Economic Cooperation and Development. There is one word that explains how: education,” Ban said.

“When I was a child during the war, we were constantly told to study hard. That was the only way to invest in our future - and it worked.”

“Education,” he emphasized, “is not a privilege” but a “birth right.”

President Park also echoed Ban in her congratulatory address, touching on Korea’s experience using education as the fuel for its economic growth.

“Korea, which lacked natural resources and capital in the wake of the [1950-53] Korean War, was able to produce talented human capital by prioritizing and investing in education. As a result, Korea was able to achieve feats such as a higher secondary education graduation rate, a low illiteracy rate and universal education,” she said, adding that those accomplishments led the nation toward prosperity.

During the forum, participants are expected to reflect upon and discuss how South Korea capitalized on the education of its citizens to channel the manpower for the country’s rapid economic growth.

Under this year’s slogan, “Transforming Life Through Education,” one of the major topics expected to be addressed in the platform “Education for All” is how countries can work together to ensure all children can attend and benefit from school and learning.

The World Education Forum has set the target of ensuring that “all girls and boys [obtain] complete free, equable and quality primary and secondary education leading to relevant and effective learning outcomes” by 2030.

The organizer also aims to adopt a declaration that will set “a shared vision of education for the future international community.”

For the 2015 World Education Forum, five key themes have been adopted: The right to education; equity in education; inclusion; quality education and lifelong learning.

In his opening statement, Indian child rights activist and 2014 Nobel Peace laureate Kailash Satyarthi noted that Korea was the proper venue for the forum, specifically because the country’s experience rightly demonstrated to the world what education can do to improve people’s livelihoods, especially when accompanied by economic growth.

“No other place other than South Korea could do better to host this event,” he said.

By hosting the event, the Korean government hopes to take the lead in global discussions on which educational objectives should be adopted for the next 15 years, using personal insight in using education as a primary tool for national economic growth.

“We hope to share our experience with the rest of the world that national growth can be realized through education and to propose a new way of teaching, which can cement our reputation as an ‘education-strong nation,’” the Ministry of Education said in statement released for the forum.