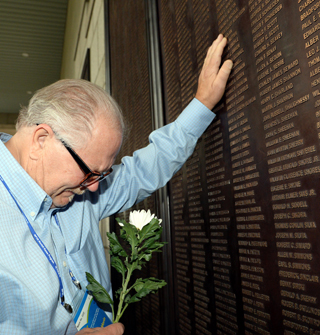 An American man pays his respects Tuesday after finding his father’s name on a memorial listing the names of missing U.S. soldiers at the War Memorial of Korea in Yongsan District, central Seoul. Forty-nine family members of 26 U.S. soldiers who went missing in action during the 1950-53 Korean War were invited to the country by the Ministry of Patriots and Veterans Affairs.[NEWSIS]