Goalkeeper gets a second chance in World Cup

Goalkeeper gets a second chance in World Cup 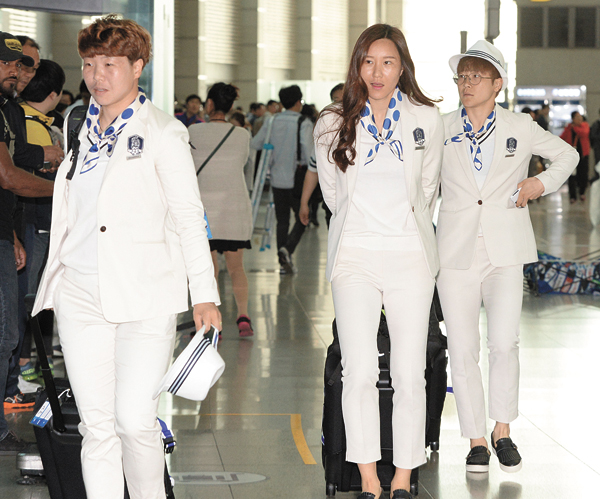 Kim Jung-mi, center, and her teammates arrive at Incheon International Airport on Wednesday en route to the United States. [NEWSIS]

Twelve years later, her job hasn’t changed, but this time the goalkeeper is the oldest player on the squad and needs to lead her young teammates in the world’s largest women’s football tournament.

Next month, the national football team will compete in the FIFA Women’s World Cup for the first time in 12 years. Kim and striker Park Eun-seon are the only ones on the 23-member squad with World Cup experience.

“I didn’t expect to play in the World Cup again,” said Kim in an interview with Ilgan Sports, an affiliate of Korea JoongAng Daily, May 12 at the National Football Center in Paju, Gyeonggi.

Kim, who plays for the Incheon Hyundai Steel Red Angels in the WK League, started as goalkeeper because she was taller than other girls in her age group. For the 178-centimeter (5-foot-10) Kim, the crushing defeat in the 2003 World Cup is a distant memory that doesn’t affect her love of football.

For 12 years, Kim has been a regular on the national team, and as she gained experience, she got better.

When asked if there was a secret behind her long run with the national team, Kim responded with only a bashful smile. But national team manager Kim Se-in attributes her success to staying in top physical condition, saying she jogs each morning. Kim, a Hanil Computer Science Girls’ High School graduate, has never suffered a serious injury.

“I’m a goalkeeper who has lot of weaknesses, and one of them is a lack of stamina,” she said. “It depends on which situation I’m in, but in order to fix my weakness I also train on my own.”

With 89 national team matches under her belt, Kim has big expectations for the team at the World Cup in Canada.

“Players’ technique, stamina, understanding of tactics and teamwork have all gotten better,” she said. “My personal goal for the World Cup is getting clean sheets”

The Korea women’s national team left Korea for the United States on Wednesday to play a friendly against the American team on May 31, Korea time. The team will arrive in Canada on June 4 before playing Brazil on June 10, Costa Rica on June 14 and Spain on June 18.