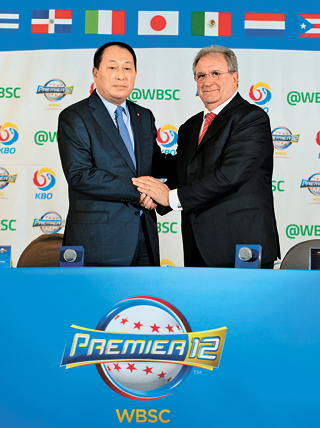 Kim In-sik, chief of the KBO’s technical committee, and WBSC President Riccardo Fraccari at the press conference for the Premier 12 tournament in Seoul on Wednesday. [NEWSIS]

Korea will clash with rival Japan and baseball powerhouse the United States at the inaugural Premier 12 baseball tournament in November.

The grouping for the new competition was unveiled at a press conference on Wednesday in Seoul held jointly by the Korea Baseball Organization (KBO) and World Baseball Softball Confederation (WBSC).

The tournament will feature the top 12 countries in the WBSC’s ranking as of November last year. The first edition will be played from Nov. 8 to 21 in Taiwan and Japan.

The new tournament is distinct from another international baseball tournament, the World Baseball Classic (WBC). The Premier 12 will be a quadrennial event and held in years when the WBC, next scheduled for 2017, is not played.

Korea, ranked eighth in the world, is in Group B along with top-ranked Japan and No. 2 United States. They are joined by the Dominican Republic (No. 6), Venezuela (No. 10) and Mexico (No. 12).

The competition will begin round-robin, with each nation playing five games. The top four nations from each group will advance to the next round, which begins the single-elimination knockout stages. The final is scheduled for November 21 at the Tokyo Dome.

Korea starts its first game against archrival Japan at the Sapporo Dome on Nov. 8. Kim In-sik, former Korean national team manager and currently the head of the technical committee at the KBO, said that Korea aims to win the inaugural event.

“Two teams have been historically been rivals so the stadium will be packed,” Kim said at the press conference.

“Although we expect more fans to be showing support for the Japanese team, we are prepared to win the championship.”

According to Kim, the KBO will announce a preliminary squad of 45 members in September. Its final 28-man squad will be decided by October 10.

Under the rule, each team can have one manager, six coaches and 28 players, of which 13 should be pitchers. Catchers should make up at least two.

“The KBO takes a lot of pride in sending a national team composed of the best players in the country,” he said.

“Nothing has been decided for the national team manager, but as we did in the Asian Games and Olympics, it can be expected that the manager of the KBO champion team could be the one.”

The WBSC hopes the new tournament will boost baseball’s popularity across the world and help the sport vie for a spot at the 2020 Tokyo Olympics. The WBSC already said that if baseball is selected as an official Olympic sport for 2020, the 2019 Premier 12 tournament will serve as the Olympic qualifier.

“I’m confident that baseball can be an Olympic sport again through this event,” Kim said. “If baseball is selected as an official Olympic sport, I’m sure it will thrill fans and players more than any other sport being considered.”