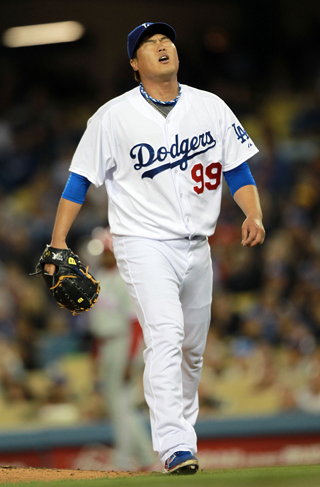 Los Angeles Dodgers pitcher Ryu Hyun-jin is likely to undergo surgery on his left shoulder and miss the rest of the season.

The Dodgers said on Tuesday, local time, the team is considering surgery for Ryu, who joined the Major League Baseball club after signing a $36 million, six-year deal in December 2012. The 28-year-old left-hander, who was 14-7 with a 3.38 ERA last year, has yet to pitch in a game this season.

Andrew Friedman, president of baseball operations for the Dodgers, said in a conference call that team doctors are still discussing the next step for Ryu and surgery is an option.

The Dodgers will make an announcement today.

“It hasn’t progressed as quickly as we all hoped,” Friedman was quoted as saying by MLB.com. “He’s worked extra hard to get back, and it isn’t happening as quickly as we’d like. It’s not a totally clear, a black-and-white issue. It’s more involved than you think.”

But already, Korean and U.S. media outlets, including CBS Sports and ESPN, have reported the former Hanwha Eagles pitcher will have the operation. According to Ilgan Sports, an affiliate of Korea JoongAng Daily, the surgery is set for Friday, citing a source close to Ryu.

Ryu made only two appearances in spring training before coming down with a sore shoulder after three innings of work in a preseason game against the Texas Rangers on March 17. The following day, he received an anti-inflammatory injection. 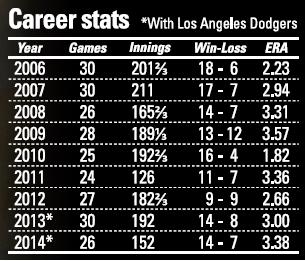 Ryu started the season on the disabled list and has not thrown since May 1 after his third bullpen session revealed a drop-off in velocity. After Dodgers manager Don Mattingly told local reporters that Ryu’s rehab was “slowed down,” the pitcher was moved from the 15-day to the 60-day disabled list May 4.

According to CBSSports.com’s Jon Heyman, Ryu will have surgery to “clean up” the shoulder, which would indicate there is not a tear in the labrum, but it may need to be “smoothed out.”

SK Wyverns conditioning coach Hur Jyae-hyeok said the labrum is a cup-shaped rim of cartilage that lines and reinforces the ball and socket joint of the shoulder and a cleanup is the least serious procedure. “It’s also called a debridement,” Hur told Ilgan Sports.

But if Ryu has a torn labrum, experts said his recovery could take a year or even longer if he also injured his rotator cuff, a group of muscles and tendons that surround the shoulder joint.

“The shoulder is riskier because it is a more complex structure than the elbow,” said Hur, “but you can’t say his career is over just by having surgery.”

This would be Ryu’s second major operation after an elbow reconstruction procedure, commonly known as Tommy John surgery, in 2004 when he was in high school.

Ryu, the 2006 Korea Baseball Organization (KBO) MVP and Rookie of the Year, was penciled in as the Dodgers’ No. 3 starter behind Clayton Kershaw and Zack Greinke, while offseason acquisitions Brandon McCarthy and Brett Anderson were to round out the rotation. However, McCarthy is already lost for the year after having Tommy John surgery.

In his seven seasons with the Hanwha Eagles, the Daejeon University graduate pitched at least 180 innings every year except 2008 and 2011. In addition, from 2006 to 2010, he participated in the Asian Games, Summer Olympics and World Baseball Classic. Ryu threw 192 innings his first year with the Dodgers and 152 last year.

“Pitchers want to pitch when they feel their condition is even slightly better, but sometimes that causes bigger problems,” said KBO technical committee chief Kim In-sik, who coached Ryu with the Eagles and on the national team. “If he has surgery and gets better, I think that’s good because he can have an extended rest. I just don’t want him to be in hurry.”