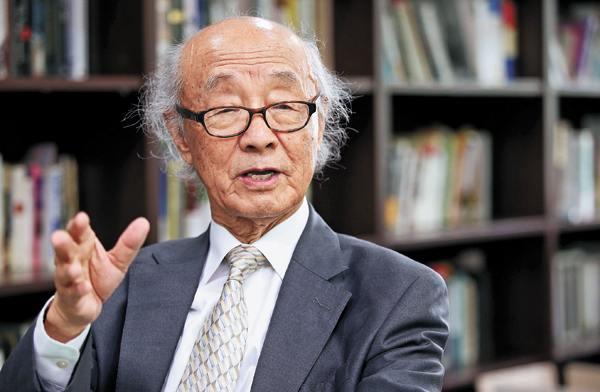 Park Han-shik, a professor of political science at the University of Georgia. By Oh Jong-taek


Pyongyang on May 8 test-fired a submarine-launched ballistic missile (SLBM), an incident that was observed by North Korean leader Kim Jong-un.

The following day, officials test-fired three additional anti-ship projectiles, identified as KN-01 cruise missiles, off the coast near Wonsan and into the East Sea.

Park Han-shik, a 76-year-old political science professor at the University of Georgia, recently visited North Korea - his 53rd time since 1990.

He sat down with Kim Young-hee, an editor at large for the JoongAng Ilbo, to discuss Pyongyang’s attempts to bolster military tension following conciliatory overtures by Seoul toward Pyongyang.

On May 8, North and South Korea agreed to work toward joint events commemorating the 15th anniversary of a landmark declaration adopted in 2000 at the first inter-Korean summit in Pyongyang as well as the 70th anniversary of the peninsula’s liberation from Japanese colonial rule.

The All-Korean Committee for Implementation of the June 15 Joint Declaration, a South Korean civic group, announced that the two sides had agreed to hold a combined event in Seoul from June 14 to 16 to mark the declaration adopted in talks between former South Korean President Kim Dae-jung and former North Korean leader Kim Jong-il, which opened up an array of business and cultural exchanges between the two rivals.

The missile threat comes ahead of the fifth anniversary of the May 24 sanctions that bar all exchanges and trade between the two Koreas, imposed after Pyongyang sank the Cheonan warship in March 2010.

Q. Kim: What was the atmosphere in Pyongyang like?

A. Park: There was an atmosphere there that you could see with your open eyes. I went back to Pyongyang after one year, but North Korean leader Kim Jong-un has put great emphasis on the military’s activities. It’s said that he is even being referred to as wonsu, [meaning marshal, the highest military rank in the army]. The people I met, and people all around, shared a similar vestige. South Korea and the United States held joint military drills between March and April, and during that period, North Korea said that though it could have taken military measures, it did not. This does not appear to be just some simple bluff. Rather, it seems that North Korea’s concern is focused on the military to the point where anyone can feel it.

The National Intelligence service recently said that 10 high-ranking officials were executed. Could you feel that sense of terror?

In December 2013, Kim Jong-un executed his uncle, Jang Song-thaek. So, nobody believes they could be safe from the same fate should they act in a way that goes against the regime.

On the other hand, the Kim Jong-un regime seems to be showing more of a willingness to communicate with the outside world.

[The North is] trying to communicate its own positions to the outside world. When I visited Pyongyang, there were many CNN reporters at the hotel at which I was staying. When I asked, “Why did you come?” they responded that even they themselves didn’t know. In the past, the media had to receive approval from North Korea should they want to report a story in the country before they could enter Pyongyang. But this time, North Korea invited CNN. There is a lot of controversy surrounding North Korea’s human rights situation within the international community, so they seem to want to emphasize to the outside world that the country comes first before the individual.

It appears that North Korea is rapidly adopting capitalistic elements.

Staying in Pyongyang for several days, you get to know all the hangouts. There appears to be more indications of a capitalistic economy than at any time before. There are more people selling merchandise on the streets and in the parks.

However, you have to look carefully. I took a walk in a place called Moranbong in central Pyongyang. But now, there is an entry fee. It’s not very expensive, but the fact that you have to pay to get into a North Korean park can be seen as a significant change.

I asked, “Who runs this place?” and was told that it’s the Pyongyang city government. So it is a means to raise revenue for the city, but there is still a long way to go toward capitalism.

North Korea this year held vigorous winter drills and also test-fired an SLBM. How should we interpret this?

In Pyongyang, Kim Jong-un’s absolute rule is progressing rapidly. If you turn on the TV, there are songs everywhere about Kim Jong-un. The songs, compared to the past, focused less on the juche [self-reliance] ideology or seongun [military first] policy. While seongun has a philosophical factor, there was a sense of a military belief of “breaking everything.” I came out with a strong feeling that there could be a war if something went wrong.

If there is a war, South Korea will see considerable damage, but the North Korean regime may see a complete collapse.

They themselves know that well. However, if Kim Jong-un says he will [wage a war], who would stop him?

So does it seem like the SLBM is the precursor to using a nuclear weapon? What is Pyongyang trying to do?

That’s a key question. North Korea is pressing hard on defense and security because it has its own position in regard to nuclear weapons. This may be my own opinion, but I got the impression that North Korea was able to yield its nuclear weapons. Of course, it will request economic support from South Korea or the United States, and when that bargaining is successful, it will be able to give up on the nuclear weapons it currently possesses.

On what evidence do you base those remarks?

I’ve examined North Korea for a long time. North Korea does not call itself a nuclear state. It possesses nuclear technology, raw materials and facilities, so this may reflect their self-confidence that if it needs to, it can always resume its halted nuclear projects.

In what sort of channel do you think the bargaining will happen?

Until now, the New York channel has been used [as an unofficial diplomatic communication route]. North Korea has been saying that it wants to hold talks and negotiations with the United States, but after North Korea breached the Feb. 29, 2012, agreement [to suspend its nuclear and missile programs], Washington turned its back.

Do you think North Korea and the United States can resume talks and under what conditions?

The impression I get of the atmosphere in the United States is that it is turning back. Last year, I proposed the North, South and U.S. 1.5-track dialogue between officials and civilians. However, Washington refused to issue visas to North Korean officials and the meeting was canceled.

Recently, Robert King, the U.S. special envoy for North Korean human rights issues, called me and asked if the meeting that I proposed before was still possible. So I replied that as long as visas can be issued, it is possible. If the U.S. government doesn’t issue visas to the North Korean people, I said there would be no choice but to hold it elsewhere, but I was contacted again and told to push for the meeting again because the visa issue was being reviewed positively. It was an indication that the meeting would be held at the University of Georgia instead of a third country. Looking at this, we can see that an atmosphere for talks between North Korea and the United States is gradually being built.

This year marks the 70th anniversary of Korea’s liberation [from Japanese colonial rule]. What is Pyongyang’s position on improving inter-Korean relations?

While there is no reason to turn down civilian exchanges, it seems they will postpone dialogue with the South Korean government. There is disgruntlement over [President Park Geun-hye’s] Dresden address [in March 2014], with the North wondering what sort of dialogue there can be with a South Korea that wants to institutionalize democracy in North Korea.

They have challenged what the Park Geun-hye administration’s unification policy is, and what kind of road map there is. From this point of view, there was discontentment toward [South Korea’s] Committee of Unification Preparation, a body that is under the direct supervision of President Park as well.