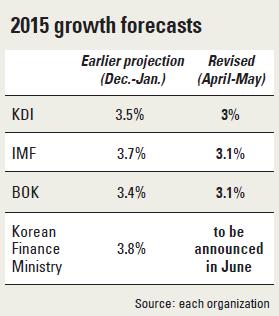 The government-run Korea Development Institute (KDI) has lowered its forecast for Korea’s economic growth this year to 3 percent from its estimate of 3.5 percent in December, citing the tepid performance of exports.

“The domestic market has steadily rebounded, particularly in investment, but exports remain in the doldrums,” said a report released Wednesday.

The report pointed out that exports have dropped sharply since the second quarter of 2014 and there has been little change in global trade volume.

“Recently, the Korean economy is showing a similar shape with that of Japan in the early 1990s,” said the report. “Japan’s main export items lost ground in competition with emerging countries in the 1990s, and that is what is happening to Korea.”

The institute said growth in Asia’s fourth-largest economy may fall to 2 percent.

The Bank of Korea should cut its key policy rate once or twice more this year, said Kim.

“Currently, the inflation rate is near zero and it is effectively lower than that considering the [January] spike in cigarette prices,” said Kim. “Authorities are aiming to stabilize inflation in the neighborhood of 2 percent, and to do that, they should aggressively implement their currency policy [to raise the inflation].”

“Despite the central bank’s rate cuts, inflation is lingering about 0.5 percent, which is very low,” said Jo Dong-cheol, a senior economist. “We expect inflation to be about 1.4 percent.”