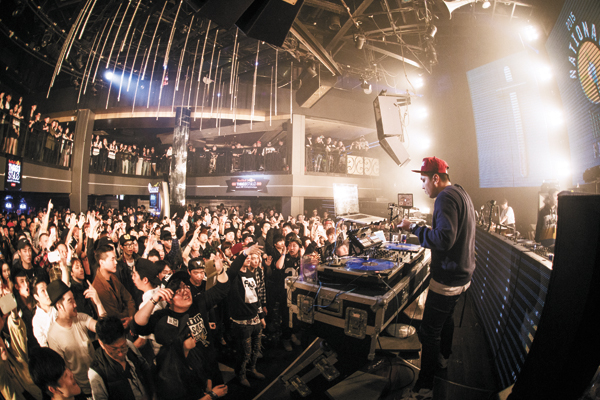 Red Bull Korea hosted the national final of its DJ competition Thre3style on May 7 at Club Answer in Cheongdam-dong, southern Seoul. Six finalists competed for the championship title and a ticket to the World Finals, which will be held in Tokyo in September. Provided by the company

Despite it not being the weekend, Club Answer in Cheongdam-dong, southern Seoul, had already heated up by 11 p.m. on a recent Thursday.

Hundreds of music lovers were at the venue on May 7 to check out the stellar electronic DJs present that night.

Six popular spinners were on the lineup for the evening - far more than usual at the club.

Some of Korea’s best DJs - DJ DD, U-Zi, Spray, Da.Q, Tezz and Hunter - took over the decks for 15 minutes to show off their techniques and scratching skills.

The audience danced and cheered with excitement while the DJs seemed like they were keeping their cool.

But underneath it all they could have been breaking out in a cold sweat. For them this was not just a fun night out - it was a competition. 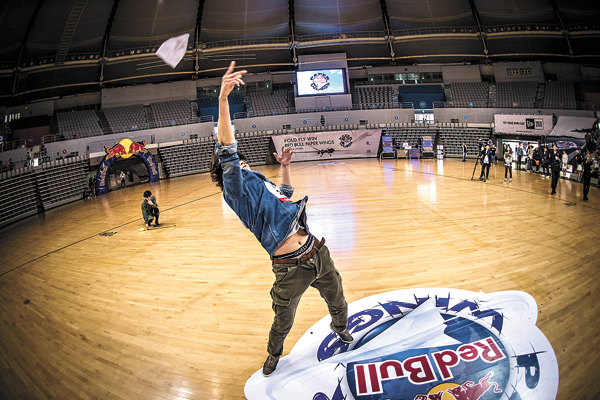 Red Bull Paper Wings is a paper airplane competition with three different categories. The world final is held once every three years.Provided by the company

Austrian energy drink company Red Bull organizes various cultural and sports events as part of its marketing, one of which is the Red Bull Thre3style, an annual DJ contest.

Any country that wants to participate in the world championship can hold their own national competition before sending their champions to compete for the World Championship title.

The national winners receive financial support to compete in the global event.

That night, the six DJs were vying for the Korean title at this year’s Red Bull Thre3style, which will gain them the chance to compete at this year’s World DJ Championship in Tokyo against the best DJs across the globe. 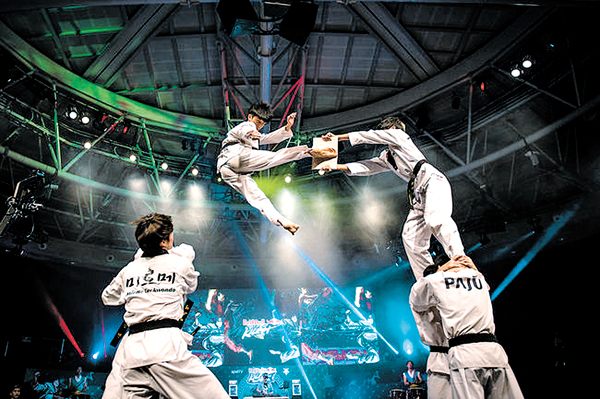 Red Bull Korea’s localized event Kick It was established in 2013. It combines taekwondo’s kicks with tricks from other martial arts. Provided by the company

The competitors were asked to show off their technical skills at the turntable, impressing the judges and exciting the crowd at the same time in their given 15 minutes. They were judged on five categories - technical ability, crowd reaction, originality in song choice, confidence in performing and mixing prowess.

DJ Tezz won the competition, alternating from upbeat hip-hop tracks to slow grooves and finishing off with rock band Linkin Park’s “In the End.”

He captivated the crowd, becoming the only DJ among six competitors to have the audience chanting his name in support.

“It was such a memorable moment, and I don’t think I will forget this moment ever in my life,” said DJ Tezz, whose real name is Seo Deok-il, 28, as he received the national championship title.

Seo works at various clubs as a DJ. It was his first time participating in the Red Bull Thre3style.

DJs, who are relatively overshadowed by other popular musicians in Korea, are not the only ones receiving opportunities to fly high through Red Bull.

With its slogan, “Red Bull gives you wings,” the company has been actively helping artists and athletes achieve their potential, especially those who work in niche fields.

In April, Red Bull also held its Paper Wings competition at the SK Olympic Handball Stadium in Jamsil, southern Seoul, to pick out the national Korean finalists to send to the Red Bull Paper Wings World Final in Salzburg, Austria.

It is difficult to believe that flying paper airplanes is a sport that attracts thousands of participants from across the globe. But 71 countries have participated in the World Finals, which is held once every three years. 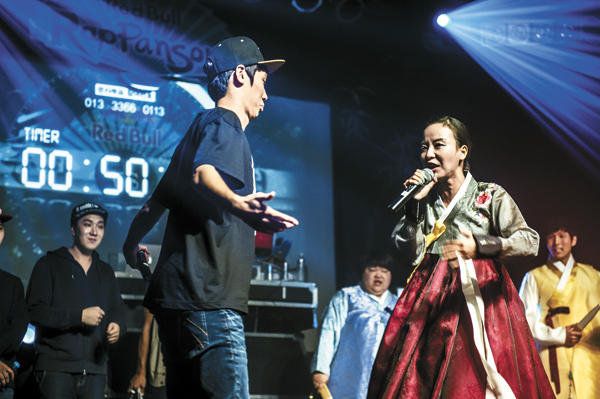 Red Bull Korea’s localized event “RapPansori” is a head-to-head battle between a rapper and a pansori (traditional Korean narrative singing) performer. Provided by the company

To find the Korean national finalist, 58 competitors who made it through the preliminaries gathered to throw white paper airplanes amid cheers from family and friends.

The contestants are provided with the same white paper by Red Bull, which is a standard A4 size and weight. They build their own special paper airplane using a secret method in order to win one of the three categories - the Longest Distance, Longest Airtime and Aerobatics.

Although it may sound simple to fold paper airplanes and fly them, it is not as easy as it sounds. To win the national championships, the entrants need to develop their physical strength to jump higher, as well as amuse the audience and the judges.

Among the winners of each category, it was highly anticipated that Lee Jeong-wook, 29, would win the World Finals for the Longest Airtime.

His best time during the national contest in Seoul was 14.19 seconds, breaking the last world champion’s record of 10.68 seconds.

“I wanted to introduce the charm of flying paper airplanes to Koreans and the world, and I am so glad that I was able to show many people through today’s competition,” said Lee upon receiving his award in May.

Lee took a leave of absence from school to concentrate on training for the international championship.

The World Finals was held on May 8 and 9.

Although no Korean won the world championship title, Red Bull Korea says the event itself attracted so much hype in the nation that it has also cast attention on the Korea Paper Airplane Association.

The most popular has been the Red Bull RapPansori battle. As the title suggests, it is a head-to-head between rappers and pansori (Korean traditional narrative singing) performers.

It is hard to imagine people from the two totally different genres of music battling against each other, but the showdown is anything but jarring.

In fact, musicians from both genres say they have similar styles. Just like rapping, pansori is a speech-based performance where participants tell stories with more than a little bluster and improvisation.

Both the rapper and the pansori singer have to first either rap or perform pansori for one minute. They then have to also try either rapping to pansori tunes or sing pansori over hip-hop tracks.

The 2013 event was highly praised, especially for giving pansori singers a chance to expand to a totally different stage.

However, Red Bull Korea said it has no plans to hold another RapPansori battle this year.

Another localized event is Red Bull Kick It.

This event, which was organized in 2013, is a new kind of martial arts competition that combines the kicking techniques of Korea’s taekwondo and martial arts-style tricks with breakdancing.

As a result, this is not just an ordinary competition, but an exciting game where competitors can show off various acrobatic movements.

Recently, a preliminary competition was held where eight competitors were picked to go head to head.

The finals will be held on Aug. 30 at Seoul Nori Madang in Jamsil, southern Seoul.

Now in its third year, Red Bull Kick It has been gaining international attention despite being a local event.

According to Red Bull Korea, a video clip of the competition went viral on YouTube, receiving about 4.5 million views a year.

Last year, the company uploaded the video to Facebook and it reached seven million views in just six days.

Red Bull Korea sees an opportunity to take the event global, just like the Red Bull Thre3style, which started as a local contest in a small club in Toronto in 2008.

Because of its immense popularity, it became an international event in just two years.

Although Kick It is not as popular as the DJ competition, Red Bull Korea believes it has international appeal. Many of the people who viewed the clips of the contest on social media were from other countries, the company said.

Red Bull Korea is also discussing developing other localized events that include elements of traditional Korea, including the game Go, ssireum (Korean wrestling) and tightrope walking.

However, the company says nothing has been decided yet.

Among dozens of other events organized by Red Bull, Koreans, above all, dominate during the Red Bull BC One, a B-boying competition.

In 2013, Korea hosted the finals of the contest, and Korean B-boy Hong 10 holds two world championship titles from the company.

This year’s World Finals will be held in Rome in November.