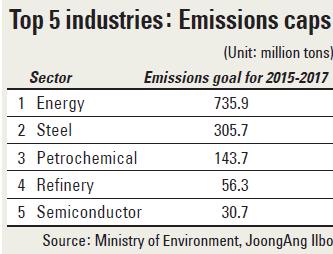 Korean businesses across more than 25 sectors issued a statement Wednesday requesting that the government reassign carbon credits due to the current emissions cap being excessively strict, which has led some heavily-emitting sectors to lose their competitive advantage against global rivals.

Participating associations include the automotive, petrochemical, steel and energy sectors, of which domestic manufacturing giants Posco, LG Chem and SK Chemical are members.

In a joint statement issued from the Federation of Korean Industries (FKI), composed of 25 sector associations and 38 energy companies, the group demanded that the government recalculate the emissions cap for each industry; reassign the emissions cap for the 2015-2017 period based on that new calculation; and review Korea’s carbon emissions forecast for 2020.

The group added that the forecast was an incorrect estimate and urged its requests to be met before Korea submits its 2020 forecast and reduction goals to the United Nations by the end of the year.

“As the economic environment remains uncertain, Korea implemented a compulsory carbon credit-trading system at the beginning of the year, stronger than that in other advanced economies like the United States, China and Japan,” the FKI and other trade associations wrote in the statement. “Those countries have set their emissions reduction goals based mainly on their national interests and the feasibility of meeting those goals.”

“The Korean government should also introduce a new reduction goal that reflects the competitiveness of local companies and refrains from making empty promises to maintain Korea’s reliability in the international arena,” it added.

The statement went on to demand the government conduct new carbon emissions research with professional research institutes and release those results publicly.

Korea has set its carbon credit allocation plan for 2015-2017 and promised the global community that it will lower its emissions by 2020 to 30 percent of what it was in 2012.

Such plans and goals were set based on research undertaken in 2009, which the FKI and business associations claim are outdated as companies so far have overcompensated to emit less than what is stated in the emissions goals.

The private sector claimed the 2015-2017 emissions caps allocated under the carbon-trading system are nearly 20 percent lower than the goal they initially suggested, leaving companies with additional costs, worth about 12.7 trillion won ($11.6 billion) in penalties to be paid by 2017, for emitting extra carbon.

According to the Ministry of Environment, the energy generation, steel, petrochemical, refinery and semiconductor industries have obtained the largest volume of carbon credit but are the most heavily emitting and have so far served as Korea’s flagship industries.

Korea is the world’s seventh largest emitting country. The world’s top five countries, China, the United States, India, Russia and Japan, have implemented the carbon-trading system only partially, while Germany’s system is nationwide.

Analysts say the government pushed reduction goals and the trading system too far and that the compulsory system should have started from a partial implementation with a regional or industry trial run.

“The government has been too obsessed with policy implementation itself and it needs flexibility in its policy implementation,” said Park Nam-gyoo, a business administration professor at Seoul National University Business School. “The entire industrial circle needed more time until preparing itself with enough carbon credits before the trading system comes into effect on a compulsory basis.

“These heavily emitting industries are especially cost-sensitive due to competition with their Chinese rivals,” he added. “That’s why the government needs to give the private sector more time to research for enhanced energy efficiency technologies.”

The government, however, has maintained its stance regarding carbon goals and its trading system.

The trading system is one of the easiest and least costly ways to reduce carbon than each manufacturer directly trying itself, an official from the Environment Ministry said, adding lesser-emitting industries should be more active in emissions control so that higher-emitting industries can buy carbon credits from them at a cheaper price.