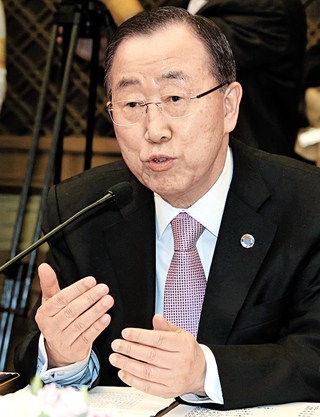 “North Korea notified us that it withdrew its permission [earlier in the day],” said Ban during a press conference at the Seoul Digital Forum Wednesday. He expressed his “deep regret” over the North’s unexpected move.

Pyongyang’s withdrawal came just a day after the South Korea-born UN chief announced his visit to the joint complex north of the heavily fortified border, raising hopes that his trip might thaw frozen inter-Korean relations.

Ban said the North relayed its cancellation Wednesday early morning through a diplomatic channel, sparking speculation that it used its UN channel in New York. But it gave no explanation.

Ban’s visit would have been the first visit for a UN chief to Kaesong, where more than 54,000 North Korean workers are employed by around 120 South Korean companies, mostly in light manufacturing. But Ban visited Kaesong as South Korea’s foreign affairs minister in 2006.

Expectations had arisen that Ban’s trip to Kaesong could be a catalyst for easing tensions between the two Koreas, which have been heightened in recent days following the North’s test-firing of a ballistic missile from a submarine.

The two Koreas are also locked in a stalemate over a wage hike for the North Korean workers in Kaesong.

“It is very unusual by standard international norms that a country rejects a visit by the head of a multinational body like the UN without any explanation,” said Kim Dong-ryul, who teaches at the Korea National Diplomatic Academy in Seoul. “When it does, a normal state should provide a sufficient rationale.”

Kim said North Korean leader Kim Jong-un’s cancellation of a previous plan to visit Moscow to attend a ceremony commemorating the end of World War II this month was also seen as diplomatic disrespect to Russia.

The South Korean government expressed regret for the cancellation of Ban’s visit and said it did not receive any explanation from Pyongyang.

“The government urges the North to avoid taking the path of isolation and instead reach out to the global community,” said Lim Byeong-cheol, spokesman for the Unification Ministry, which is in charge of inter-Korean relations.

It’s possible that the North was angered by Ban’s remark Tuesday that missile and nuclear weapons development by the North amount to “violations of resolutions by the UN Security Council” and moved swiftly to ban him from entering the country as punishment.

Some say North Korea figured it would have nothing to gain from allowing a visit by Ban at a time when the UN is increasingly pressing Pyongyang to improve dire human rights conditions and close down political prison camps that are estimated to imprison nearly 200,000 inmates.

“It is obvious that the North took into account the fact that Ban is from South Korea,” said Koh Yu-hwan, professor of North Korean Studies at Dongguk University. “A message Ban delivers is heard by worldwide audiences. The Kim Jong-un regime appears frightened over the prospect that it could be scolded by the UN chief.”

Koh said Kim Jong-un also appears to be facing the problem of showing some achievements in his fourth years in power. “He needs to show some policy outcomes, but he hasn’t,” said Koh.