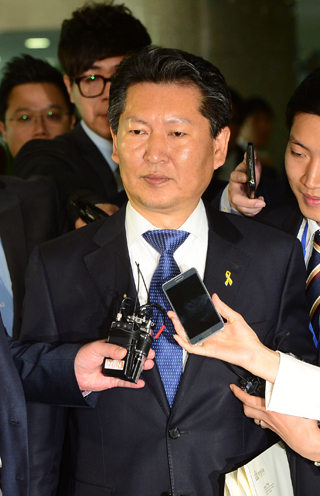 A senior politician known for his blunt criticism stood before the main opposition party’s ethics tribunal on Wednesday over recent remarks he made that fueled internal strife within the party following its crushing defeat in the by-elections.

Rep. Jung Cheong-rae of the New Politics Alliance for Democracy (NPAD) appeared before the party’s ethics tribunal in the morning to provide his version of events.

The tribunal, composed of nine members including its chief Kang Chang-il, had its first deliberation last week on charges that Jung had disgraced the party after rudely attacking a fellow lawmaker. After the second hearing, Kang said the panel will meet again Tuesday to make a final decision.

Jung’s controversial remarks came during a Supreme Council meeting on May 8, when officials on the NPAD’s highest decision-making body were discussing how to handle its bitter defeat in April’s legislative by-elections.

But during the meeting, the lawmaker stated that the NPAD’s bigger problem actually centered on a person who “blackmails the party” by putting his leadership position at stake, targeting his criticism toward fellow council member Rep. Joo Seung-yong.

A harsh critic of NPAD Chairman Moon Jae-in ? specifically, the way the opposition leader has run the party ? Joo had repeatedly signaled that he would step down from his Supreme Council position unless Moon eliminated lawmakers from his inner circle loyal to the late President Roh Moo-hyun.

Apparently upset by Jung’s comment, Joo left the meeting, expressing his deep humiliation as well as his intention to resign.

After its defeat in the April by-elections, the NPAD showed several signs of deep-rooted internal discord, and the rift between Jung and Joo was criticized by many party members as having publicly disgraced the party.

On May 11, a group of 139 NPAD members submitted a petition to the ethics tribunal to discipline Jung.

“I will do my best to explain my position,” he said prior to entering the hearing.

The harshest punishment the tribunal can hand down is expulsion from the party. “If we think Jung had enough chance to speak for himself, we will make a decision today,” said Kang, who heads the tribunal. “If not, we will give him one more chance to argue his case.”

Asked if the panel would be lenient based on a letter of appeal submitted by 25 NPAD lawmakers and dozens of other party members, Kang said, “We will consider it, but we will make a decision based on the party’s Constitution and regulations, not politics.”

A former student activist and two-time lawmaker, Jung is famous for his pointed and straightforward criticism. During the 2012 election, he served as the online communication chief for Moon’s presidential campaign.

If the ethics tribunal decides to expel or suspend Jung’s NPAD membership, he will be prohibited from applying for a nomination in the next legislative elections.

On Monday, a similar petition was submitted to the ethics tribunal against Joo by 60 party members from its chapter in South Jeolla, demanding that he be punished for causing internal strife.

The officials argued that though Joo was elected as a Supreme Council member by party members, he had apparently failed to remember that and repeatedly threatened to step down only to backtrack later.

They added that Joo’s actions had clearly fueled in-fighting within the party. Party members went on to state that the NPAD needed unity now more than any other time since its by-election loss, but that Joo had only sparked discord between members in the Jeolla region and other areas, as well as between Roh associates and others.